Modular smartphones never really took off in a big way. Google and LG discontinued their experiments in the modular space, and while the Moto Z line might not be officially dead, it hasn’t seen a new entry in a while.

But Chinese phone maker Oppo has filed for a patent on a phone with a modular camera system that would let you remove and replace the camera.

This could open the possibility of swapping out camera modules when you want to use different lenses, sensors, or other features. Or you might be able to buy a phone that comes with one camera module, but upgrade to a higher-performance module a year or two down the road when new modules are available.

It’s unclear whether Oppo has any plans to release actual hardware based on this design. But it wouldn’t be the first company to offer a smartphone with an upgradeable camera. 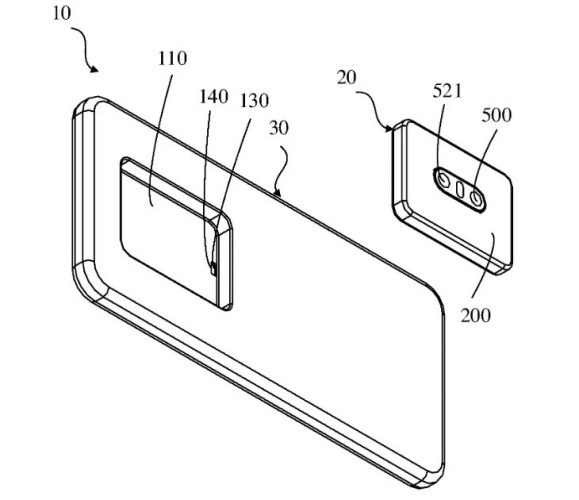 Ethical smartphone maker Fairphone sells a smartphone that’s designed to be easy to repair, allowing anyone to order replacement parts, open up the phone, and swap out broken components for new ones.

This summer, the company released a new camera module for the Fairphone 3 that doesn’t just let you replace the phone’s default cameras, but upgrade them. The new camera module features a 48MP rear camera with support for HDR photography and zero shutter lag and a 16MP front-facing camera, up from the 12MP rear and 8MP cameras the phone originally shipped with.

Oppo’s patent would only apply to the rear camera system, but it could be even easier to remove and replace a camera module since you wouldn’t need to open up the phone’s case. The camera is connected to the phone via USB-C.

The sample camera shown in drawings filed with the patent reveal a dual camera system with an LED flash, but it’s possible that other modules could have different features. The patent also mentions that the camera module may have its own battery and wireless card with support for WiFi, Bluetooth and NFC, allowing you to eject the camera and remotely control it from your phone for selfies or other shots that may be tough to frame when you’re holding the camera in your hands.

Or maybe Oppo’s modular phone concept device will never see the light of day. After all, the idea of modular phones isn’t exactly new, and companies haven’t had a lot of success with the idea in the past:

So the only reason I’m moderately optimistic that this could come to pass is that if a small company like Fairphone can release a camera upgrade, it’s not out of the realm of possibility that a major smartphone maker like Oppo could do it… even if the company’s vision is a bit more ambitious than a replacement part.