Software is getting pretty good and guessing what you want to do based on context. That’s why keyboard software for smartphones can suggest words as you type and it’s how Gmail can show a message asking if you meant to include an attachment if you forget to add one to an email message you just hit the send button on.

Now Google’s going a step further… and answering your emails for you. OK, not really. But the new Smart Reply feature for Google’s Inbox app comes pretty close to doing that by offering short text snippets that might be appropriate responses to your messages. 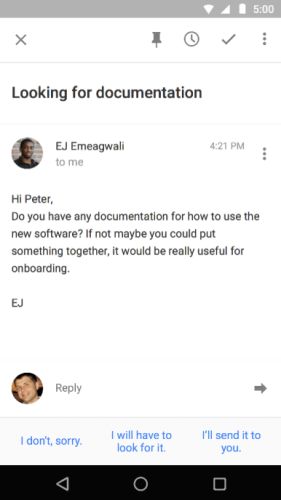 Smart Reply will offer up to three responses to a message. Just tap the appropriate one and hit send… or tap the response to get started and then add some more text before sending.

This isn’t meant to replace long, personal messages. Instead it’s a time saver that keeps you from typing things like “I’ll send it to you” or “I’ll have to get back to you later.” It lets the recipient know that you’ve seen their message without taking up too much of your time… and keeps messages waiting for responses from stacking up in your inbox. You can also get quick suggestions for yes/no questions like “we’ll be there,” or “sorry, we won’t be able to make it.”

Or maybe it is supposed to have a more personal touch. Google says Smart Reply learns from your behavior, so over time the suggested responses start to sound more like you.

Smart Reply will be rolling out to Inbox for Android and iOS later this week.