The iPad has a 9.7 inch display, which means you can fit a just-about-full-sized keyboard into a case or cover for that tablet. And plenty of companies have done that, offering a wide range of keyboard options for Apple’s tablets.

Apple’s iPad mini, on the other hand, has a smaller 7.9 inch display. While you can certainly make a keyboard case for a tablet that size the only way to fit full-sized keys would be to leave some out. Instead of doing that, companies seem to be shrinking their keyboards. Go figure. 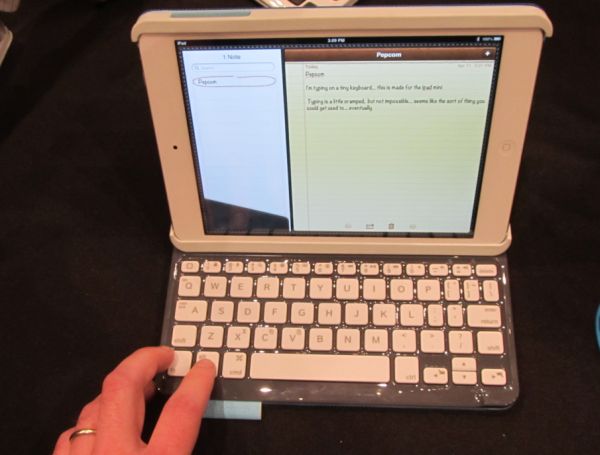 I got a chance to check out both last night. They’re well-built little keyboards, but typing on them is about as comfortable as on the original 7 inch Asus Eee PC 701. That’s to say, it takes some getting used to.

All the usual keys are there, including arrow keys. And there’s a bit of space between the keys, so once you get the hang of things, you should be able to touch-type on either of these keyboards. But all the keys are tinier than you’re probably used to, so switching between a full-sized notebook or desktop keyboard and an iPad mini keyboard can be a bit jarring.

Logitech’s Keyboard Folio mini is a $90 keyboard which is also a protective folio case for the tablet. The iPad mini fits snuggly into a plastic frame. You can then close the keyboard over the screen like you would close a book — and thanks to the power of magnets, the screen will automatically turn off when you cover it with the keyboard case.

When you want to type, just open the case, lift up the display portion and position it so the base is in front of the keyboard. It will snap into place.

The Ultrathin keyboard isn’t a full-fledged case. But the $80 keyboard lives up to its name: at just 0.29 inches, it’s a lot thinner than the Folio mini, which is almost an inch thick. 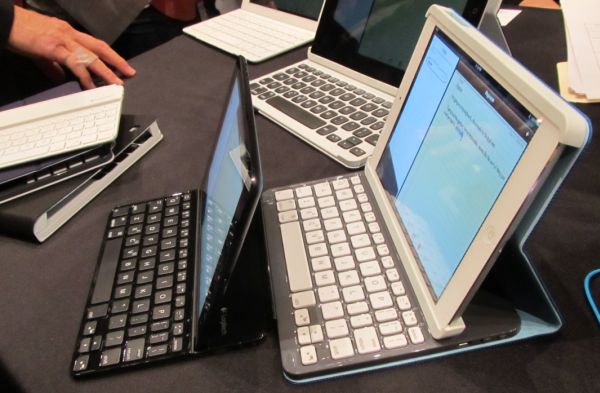 You can snap the keyboard onto the edge of the iPad mini thanks to magnets in the hinge. Then you can fold the keyboard over the screen and use it as a screen cover, or open up the keyboard for typing.

Both keyboards connect to the iPad mini over Bluetooth, and can actually be used up to 10 meters away from the tablet. And they both offer up to 3 months of battery life (if used for about 2 hours a day).

I’m not entirely convinced that typing on these tiny keyboards would be substantially faster than using the on-screen keyboard on the iPad mini. But if you’re looking for a physical keyboard for Apple’s smallest tablet, these are just two of the latest options available.