The Smach Z is a handheld gaming computer that’s been in development for so long that it was derided as “Scam Z” in a popular YouTube video more than two years ago.

But after many delays, the developers of the Smach Z started showing off working prototypes this year, letting trade show attendees actually play games on the compact gaming PC.

Now the company has sent one of those prototypes to YouTuber The Phawx, who has started posting in-depth videos showing just what the Smach Z can do… so far. 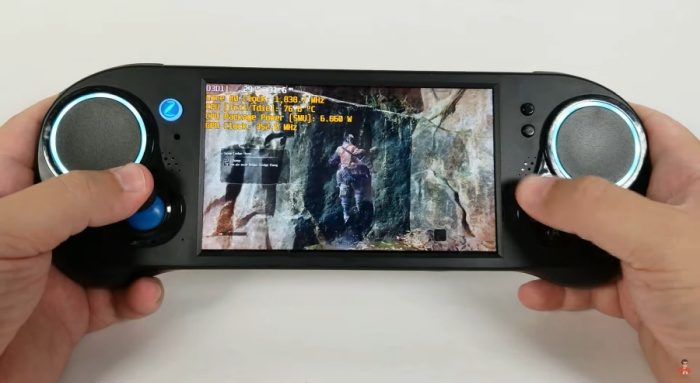 It’s worth keeping in mind that the unit featured in the videos is a prototype. Some hardware and design features may be subject to change. And it’s possible that software could be tweaked to improve performance.

For now, The Phawx notes that he’s testing a Smach Z with an AMD Ryzen V1605B quad-core processor, AMD Radeon Vega 8 graphics, 32GB of RAM, 256GB of storage, a 5MP camera, and Windows 10.

It features a 6 inch, 1920 x 1080 pixel touchscreen display surrounded by Steam Controller-style gaming controls including buttons and touchpads. Since most of the functions can be mapped to keyboard and mouse controls, you should theoretically be able to play PC games that normally require a keyboard as well as titles that are designed for game controllers.

That’s one thing that sets the Smach Z apart from existing handheld gaming computers like the GPD Win and GPD Win 2, which both have clasmshell-style designs and QWERTY keyboards.

The other thing that sets the Smach Z apart is its processor (although the upcoming GPD Win Max is also expected to feature an AMD Ryzen Embedded processor).

While the Radeon Vega 8 GPU makes the Smach Z one of the most powerful handheld gaming computers to date, The Phawx notes that the prototype he’s testing has a 15 watt TDP which means the chip may not be living up to its full potential.

He was able to get it to run at 25 watts, but the system got too hot for comfort. But he was also able to improve 15 watt performance by disabling two CPU cores (which aren’t really needed for gaming) in order to allow the remaining CPU cores and the GPU to run at higher speeds without generating more heat.

After doing that, he was able to get about 20 frames per second while playing Sekiro: Shadows Die Twice at low graphics settings and with the screen resolution set to 1024 x 576 pixels. But he estimates that performance would be roughly double if Smach Z (or modders) are able to get the processor to run comfortably at 25 watts.

Update: The Phawx says he’s managed to get the heat issues under control, which allows him to run the system at 25 watts, which allows the CPU and GPU to run at higher speeds, bringing the frame rates closer to 30 frames per second. You can see what that looks like in the second video posted below.

In terms of benchmarks, the Smach Z prototype seems to handle itself pretty well. Here are a few scores from The Phawx compared with the scores I got last year when testing a GPD Win 2 handheld gaming PC with an Intel Core m3-7Y30 processor and Intel HD 615 graphics.

Note that these benchmarks are for a Smach Z running with a 15 watt TDP. Increasing the TDP to 25 watts should boost scores a bit.

Overall, while these videos show a pre-production device, they do at least confirm the the Smach Z is a real thing… and it really is capable of handling modern PC games (Sekiro: Shadows Die Twice came out just a few months ago).

A few other interesting things to note from The Phawx’s videos:

If the markings on the box are accurate, the Smach Z may also be available with up to an AMD Ryzen V1807B processor with Radeon Vega 11 graphics.

According to the Smach Z website, the portable gaming PC is on track to ship this year. Prices start at $699 for a model with 4GB of RAM, 64GB of storage, no camera, and the Linux-based Smach OS.

While the device isn’t actually available for purchase yet, you can reserve one for a down-payment of $10.