Last month YouTuber The Phawx started posting in-depth hands-on videos of a prototype he received from Smach. And now Smach is showing off the latest versions of its hardware at GamesCom in Cologne Germany.

Among other things, the company has confirmed that the Smach Z will come with two different processor options. 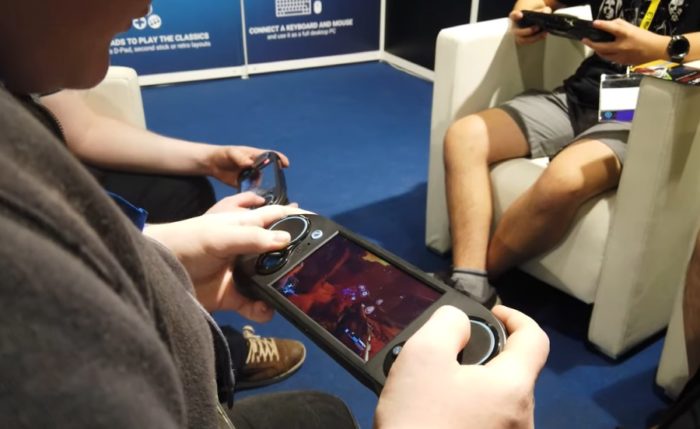 Up until now, Smach had been saying the Smach Z would feature a Ryzen Embedded V1605B processor with Radeon Vega 8 graphics.

But according to packaging spotted earlier this year, it looked like there would also be an option to buy a version with a more powerful Ryzen Embedded V1807B processor and Radeon Vega 11 graphics.

Smach says it’s worked in “closer collaboration with the AMD team” to make the more powerful version possible. In addition to having three additional GPU cores, it runs at significantly higher speeds (although it’s also expected to consume more power, which could cut into battery life).

Here are some key specs for the two chips:

Note that while the official specs for the V1807B say it has a starting TDP of 35W, the version used in the Smach Z seems to be running at 15 watts, just like the V1605B chip used in lower performance models.

According to at least one game developer who had a chance to play with a Smach Z featuring the V1807B processor at GamesCom it was “running very good.” That person also tried the V1605B model and had no trouble playing the 2016 version of Doom as well as Cuphead and Rocket League.

The biggest issue at the moment seems to be that it’s difficult to map the Steam Controller-style touchpads and buttons for use in games, so right now they’re set to emulate mouse and keyboard functions. But Smach is apparently developing a tool that will make the process easier.

Smach says it plans to begin shipping its handheld gaming PC to customers by the end of the year. It’s still up for pre-oder from the Smach website for $699 and up (you’ll only be charged a $10 reservation fee). But there’s no option to configure the system with a Ryzen V1807B chip yet, so it’s unclear how much more you’ll have to pay for a model with that processor.