The Smach Z is a handheld gaming PC that’s been under development in one form or another since 2014, when it was little more than a concept device called the SteamBoy.

Now it’s looking like the folks at Smach are almost ready to ship the system. The company has released a set of promotional videos that show a bit of gameplay on the Smach Z, and mass production of the portable game system is set to begin in the first quarter of 2019. 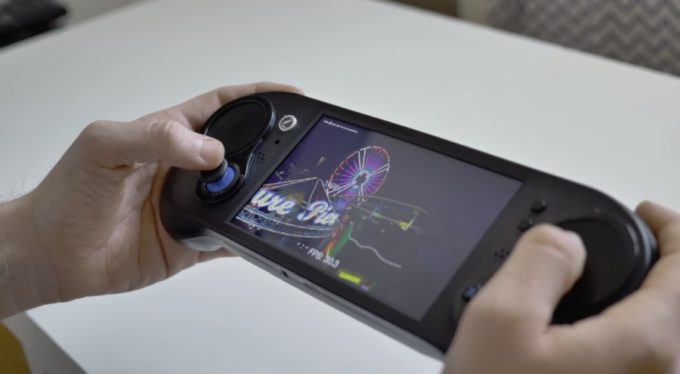 The Smach Z features a 6 inch, 1920 x 1080 pixel touchscreen display with physical gaming controllers on the left and right sides. Like Valve’s Steam Controller, there’s an analog stick on the left and X,Y,A,B buttons on the right, along with left and right touchpads that can be used for a variety of functions.

In fact, the Smach Z basically looks like what you’d get if you cut a Steam Controller in half and put a screen in the middle. But that’s easier said than done, which is why it’s taken so long for Smach to finalize the design — for years the company has been showing non-working prototypes and/or demo systems that aren’t anywhere close to a fully functional portable device.

If mass production is actually slated for early 2019, it might not be long before the Smach Z is actually a real thing you can buy — and a real thing that backers of Smach’s previous crowdfunding campaigns might finally get their hands on — Smach says the computer will ship to Kickstarter and Indiegogo backers first.

It comes with a choice of Windows 10 Home or a Linux-based operating system called Smach OS which allows you to run Valve’s Steam game client. And that’s actually a little more exciting than it was when the SteamBoy/Smach Z was first announced, since there are more Steam games available for Linux than ever… and Valve has recently made it possible to run some Windows games on Linux even if the developers don’t officially support the OS.

You can also pay a little extra for a special paint job if you don’t want to stick with basic black. Color options include green, indigo, white, red, golden, and “zombie.”