It looks a bit like a PlayStation Vita, but the Smach Z runs Windows 10 or Linux, has a 6 inch, full HD display, and is powered by an AMD processor with Radeon R7 graphics.

The folks behind the Smach Z launched a Kickstarter campaign last year, but quickly canceled it to focus on building a prototype and finalizing the design.

Now the Smach Z is back on Kickstarter and the team hopes to ship the handheld gaming PC in April, 2017. 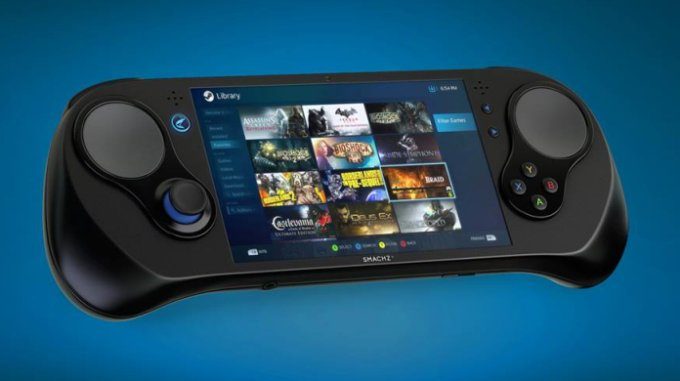 You can reserve a system for a pledge of 299 Euros or more (that’s about $328). Early birds can get in on the action for a little less.

The Smach Z is available with Windows 10 or a Linux-based operating system called Smach Z OS, which has been optimized for the system’s small screen and gaming-centric features. While there are probably more games available for Windows, both operating systems support the Steam game client and the developers of the Smach Z “recommend choosing Linux for better performance.”

This handheld game system has been in development for a long time. It was originally called the SteamBoy, then the Smach Zero. Now it looks like it’s finally close to become a real product. Here’s a video showing a working prototype in action:

While the system doesn’t exactly have the horsepower to handle bleeding-edge games, it seems to do a pretty good job with a variety of PC titles.

It should also be able to handle Steam’s in-home game streaming, allowing you to stream games installed on a more powerful gaming PC over your home network.

And since there’s a full-fledged PC under the hood, you could probably use the Smach Z for non-gaming activities… but you’d need to connect a keyboard, mouse, and maybe an external display. Unlike some other handheld game systems in the works, the Smach Z doesn’t have a physical keyboard.

The Kickstarter campaign has a goal of €250,000 (about $275 thousand), and with more than a month left to go, the project is already pretty close to meeting that goal.