There are a growing number of handheld gaming computers available including three models that launched in just the first half of this year, the ONEXPLAYER, GPD Win 3, and AYA Neo.

But one device that was announced long before any of the others has been stuck in limbo for years, and now it looks likely that the Smach Z handheld gaming PC will never ship to customers or backers of several crowdfunding campaigns.

In a recent update posted to the members-only Smach Z forum, and re-posted to reddit, Smach founder Daniel Fernandez says that the company has lost the support of its primary investor, and will likely declare bankruptcy soon. 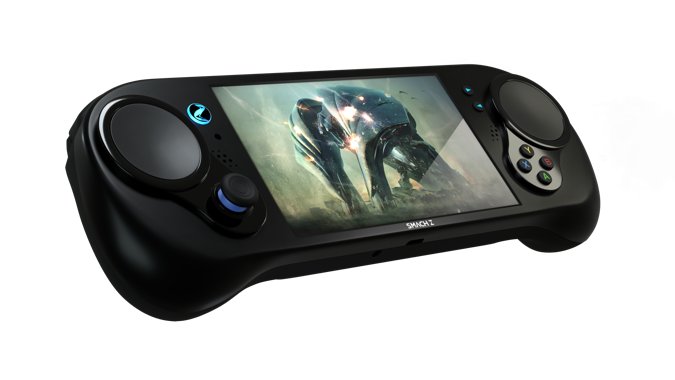 Fernandez notes that there’s still a slim chance that Smach Z could find a new investor, but he acknowledges that it’s unlikely to happen. It’s also unclear if or when the company will have the funds to continue issuing refunds to customers.

The Smach Z was an ambitious project from the start. First announced as the SteamBoy in 2014, the idea was to put a full-fledged computer (running Valve’s Linux-based SteamOS operating system at the time) into a handheld device at a time when portable gaming typically required a big laptop or a purpose-built device like a Nintendo DS.

After a name change and a few false starts, the first Smach Z crowdfunding campaign went live in 2016, with the promise that backers would get a handheld computer with a 6 inch full HD display, an AMD Merlin Falcon RX-421BD processor, and integrated game controllers the following year.

That… did not happen.

Some folks took the failure to launch as a sign that the Smach Z was always a scam, meant to dupe investors and backers out of their money. Others figured the designers were just in over their head and failed to fully grasp the time, effort, and money it would take to transform the Smach Z concept into an actual, working device.

We may never know the full truth of the matter (and it may just depend on your personal definition of the word “scam”). But the Smach Z started to show signs of life again in 2018 when Fernandez detailed a hardware revision based around AMD’s newer, more powerful Ryzen V1605B embedded processor.

The hardware design was said to have been finalized the following year, and the company even sent a mostly-functional prototype to YouTuber The Phawx, and then… not much happened.

In the latest updated, Fernandez lays out a number of setbacks the company experienced, including financial setbacks and several hardware issues that the Smach team doesn’t have the resources to resolve. At this point the company is down to just 3 people and there’s not enough money left to pay partners to work on hardware or to issue refunds to customers.

If Smach does declare bankruptcy, that might free up some money to continue offering some full or partial refunds, but there are no guarantees that anyone who backed the crowdfunding campaigns will get their money back – Fernandez says any refunds the company is able to issue will first go to “direct customers from our website” who put in a down payment to reserve a Smach Z.

While the Smach Z will probably never ship, its legacy does sort of live on in the current crop of handheld gaming computers from other companies. In 2014 when the SteamBoy was first announced, there was nothing quite like it on the market. Now there are multiple options for gamers who want to a handheld PC.

But that’s cold comfort for those who may have already spent money on the doomed Smach Z.