The Smach Z is a handheld gaming PC that’s been under development for years. But the specs were recently finalized and the Smach team is showing off a (non-working) prototype at Embedded World this week.

Now the company has announced that it’ll begin taking pre-orders for the Smach Z on March 15th, offering a 10 percent discount to the first 10 thousand customers. 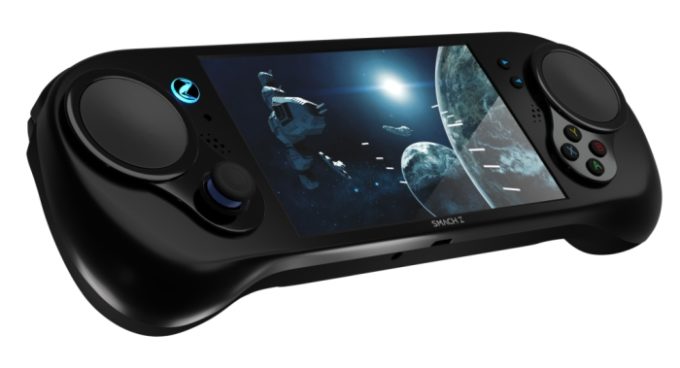 Rather than promise a delivery date that might be delayed (again), the team is holding off on publicly stating an estimated ship date.

The Smach Z features a 6 inch display surrounded by physical gaming buttons and customizable touchpads similar to those found on Valve’s Steam Controller. Using touchpads instead of analog sticks allows you to play games designed for mouse input without plugging in a mouse.

While this isn’t the first handheld gaming PC announced, the Smach Z should be a lot more powerful than rival game systems from GPD.

The upcoming GPD Win 2 has an Intel Core M3-7Y30 processor, Intel HD graphics, and a 720p display. The Smach Z has an AMD Ryzen Embedded 1605B quad-core processor with Radeon Vega 8 graphics and a 1080p screen. It’s expected to offer 2-3 times the gaming performance of the Win 2.

Smach has provided some benchmarks for popular games:

Keep in mind that we won’t actually be able to confirm those numbers until Smach launches a functional prototype using the final design.

The Smach Z is expected to come in two versions: the entry-level model has 4GB of DDR4-2133 memory and a 64GB solid state drive, while the Smach Z Pro has 8GB of memory, 128GB of storage, and a 5MP camera.

Both versions feature DisplayPort, USB Type-A, Type-C and micro USB ports, an SD card reader, WiFi, Bluetooth, and a headset jack. The system is said to support Windows 10 Home or “Smach OS Linux” and it comes with a USB Type-C charger.

With the company still showing what appears to be a 3D printer case and non-functional hardware, it’ll likely be a little while before the Smach Z is actually ready to ship. But the company does promise that customers who pre-order at the discounted price will “receive the console before the market release,” whenever that is.