So there’s good news and bad news for folks who’ve been following the development of the Smach Z handheld gaming PC for the past four years. The good news is that, as promised, Smach is showing off an alpha prototype at Embedded World this week.

The bad news is that it’s a non-working prototype.

The company has finalized the specs, updated the processor to a Ryzen V1605B with Radeon Vega 8 graphics, designed a motherboard and daughter board, and created a case prototype. But the whole thing is tucked away behind glass at Embeded World, where the folks at Computer Base got to look (but not touch). 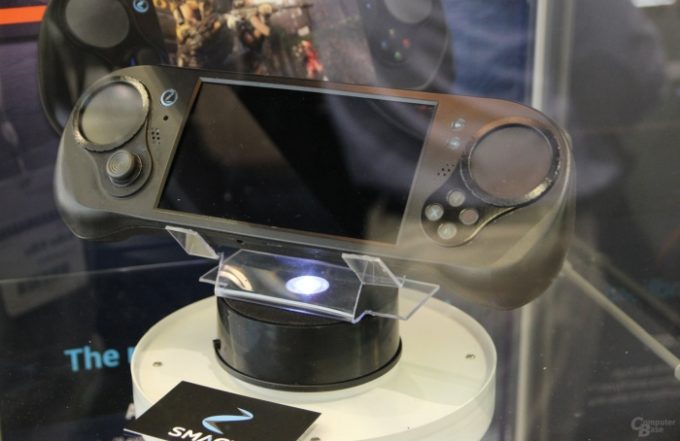 That said, we now have the most accurate idea to date of what the finished product will look like if and when it ships.

Smach has also confirmed that the Smach Z will have a retail price of $699, while the Smach Z Pro (with a 5MP camera and twice the memory and storage) will sell for $899.

Both models will have a 6 inch, 1920 x 1080 pixel touchscreen display with touchpads and gaming buttons on the sides. The Smach Z should support Windows 10 or Linux and it’s designed first and foremost as a gaming machine: there’s no physical keyboard.

Other features include USB Type-A, Type-C and micro USB ports, an SD card reader, a headset jack, and WiFi. It even has a full-sized DisplayPort output.

The Smach Z project got its start as a concept device called the SteamBoy in 2014, and after a few false starts, Smach launched a crowdfunding campaign for the device in 2016.

The many delays and setbacks that have affected the project have led some to wonder whether it’s some sort of scam. With Smach finally showing off something closer to the final design, it certainly looks like the company is trying to bring the Smach Z to market. And with AMD’s Ryzen 1605B processor, it could offer 2-3 times the gaming performance of the upcoming GPD Win 2, which is probably its closest rival.

But it remains to be seen how big a market there is for $699 handheld gaming systems when you can buy a Nintendo Switch for half the price.