Want to stream content from your phone to your TV? You could get a Chromecast or Miracast dongle and try to do it without wires. But if you’ve got a phone or tablet that supports SlimPort technology, you can plug your mobile device into your TV with an HDMI-to-micro USB cable.

Of course, then you’ve got to reach for your phone every time you want to pause, fast forward, or rewind. You’ll also probably run down your phone’s battery while videos play, because the HDMI cable plugs into the same port you’d normally use to charge your device.

Now the company that developed SlimPort has a new solution called the SlimPort Nano Console that addresses both of those issues, plus a few more.

It’s expected to sell for $59 soon, but if you back the SlimPort Nano Console crowdfunding campaign on Indiegogo, you may be able to reserve one for as little as $34. 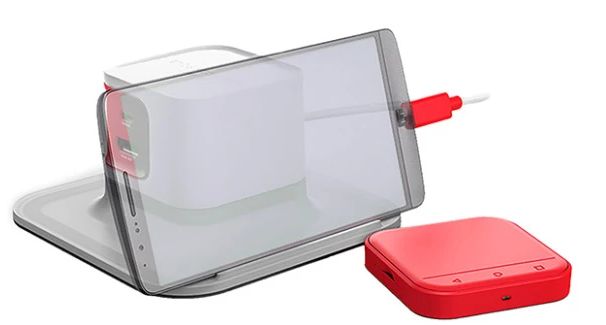 The Nano Console is a small box that measures about 2.4″ x 2.4″ x 1.8″ and which has a micro USB cable that you can use to connect your phone.

Plug the box into your TV and you can use it to display content from your mobile device on the big screen. Plug the box into a power source and it’ll charge your phone at the same time. And if you want to connect other devices to your TV, there’s an HDMI input on the Nano Console too, so you don’t have to lose a  port on your TV.

It also comes with a Bluetooth remote called the Nano Remote. The remote features a touchpad for mouse-like gestures as well as physical volume and power buttons.

So why use the SlimPort Nano Console instead of a wireless display dongle like the Chromecast? one reason is that a wired connection is usually more reliable and just about always has less latency… which can come in handy if you want to play games on a big screen.

One of the higher reward levels for the Indiegogo campaign is a Gamer Pack which comes with a Mad Catz M.O.J.O. C.T.R.L. wireless game controller for Android gaming.

The Nano Console supports resolutions up to 3840 x 2160… assuming your phone supports Ultra HD output. And that’s one of the biggest problems with SlimPort: the platform isn’t exactly universal. The Nano Console could be super-useful if you have a device that supports it. But there are a lot of phones and tablets that do not.

The SlimPort Nano Console comes from Analogix, the semiconductor company behind SlimPort and the goal is to ship units to backers of the crowdfunding campaign in November.