Want the portability of a laptop, but the versatility of a multi-monitor setup? You could buy a portable display and lug it around. Or you could back Slidenjoy’s Kickstarter campaign for a system that makes it simple to add an extra screen or two to your laptop. 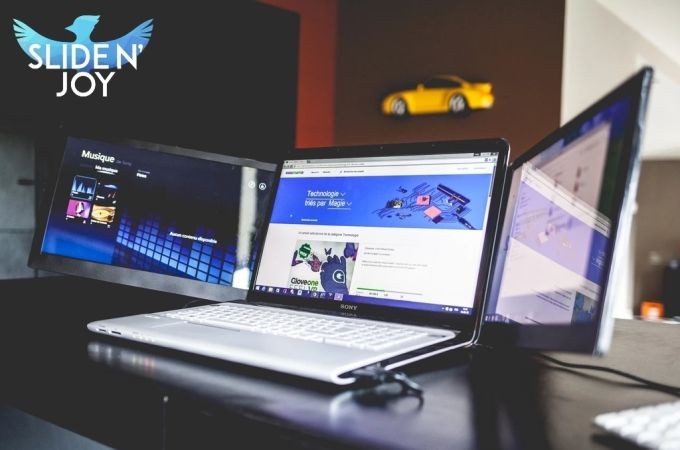 Slidenjoy clips onto the back of your laptop display with magnets, and lets you slide out up to two displays. You can adjust the angle of the displays, and even flip them around so other people can see what you’re working on.

Early backers of the Kickstarter campaign can reserve a Slidenjoy with a single screen for a pledge of about $220. A twin screen model will set you back at least $330.

Each screen is an IPS display with a 1920 x 1080 pixel resolution, and Slidenjoy will offer 13, 15, and 17 inch models at launch. The plan is to ship the first Slidenjoy units to backers of the campaign in December.

The screens connect to your computer using a USB 3.0 or USB 2.0. Data and power are both transferred over USB, so you won’t need to plug in a power cable… although your laptop battery will probably run down rather quickly if you’re using it to power three displays instead of one.

Slidenjoy says its system supports both Windows and OS X, allowing you to extend your desktop or mirror your screen.

The company is also working on Linux support and if the original Kickstarter campaign is successful, Slidenjoy eventually hopes to add new models with integrated batteries, touchscreens, and support for desktop computers.