You can build your own media center PC by installing XBMC software on a $35 Raspberry Pi mini-computer. But while the process is pretty simple for advanced users, it can be a bit daunting for folks who are new to Linux. Plus you end up with a media center that looks a bit like a circuit board.

Enter Slice. This media center uses a Raspberry Pi Compute Module and comes with XBMC pre-installed as well as a custom Slice user interface which is designed to make the software even more user-friendly.

The developers of the Slice project are running a Kickstarter campaign to fund production of the device and plan to begin shipping units to backers in November and December. 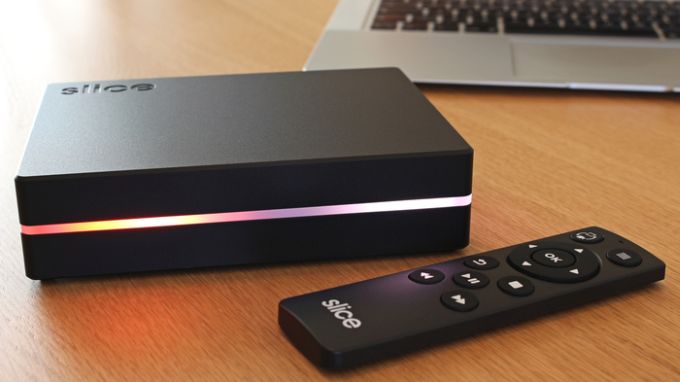 The Slice features 4GB of eMMC flash storage for the operating system and a 1TB 2.5 inch SATA hard drive for storing your photos, music, and videos. It has an aluminum case with 25 programmable RGB LED lights.

An early bird pledge of £109 (about $183) gets you a preview device with a case and a wireless remote control. But there’s no hard drive: you’ll have to install your own.

While you could certainly build your own Raspberry Pi-based media center for a lot less money, there’s something to be said for having someone else do the work of designing a case, optimizing the software, and adding a wireless remote control for you.

Two of the members of the development team are also engineers from the Raspberry Pi team, so this project is about as close as we’re likely to see to an official Raspberry Pi media center solution any time soon.

Or you could just buy a Roku for $50… but it won’t offer the versatility you get with a Raspberry Pi-based system with XBMC software. If you really wanted to you could probably scrap XBMC altogether and just turn the Slice into a low-power desktop computer or repurpose it for other applications.

9 replies on “Slice is a simple media center based on XBMC, Raspberry Pi (crowdfunding)”