Slax is a Linux-based operating system that you can run from a CD or USB flash drive. Developer Tomáš Matějíček is getting ready to release version 7, and this week he’s launched the first release candidate of Slax 7.

It’s a fully-functional operating system that weighs in at less than 190MB and which runs well on computers with at least 256MB of RAM. 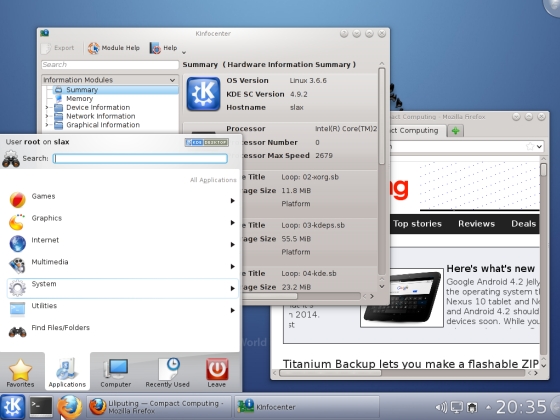 Slax 7 RC 1 is based on the Linux 3.6.6 kernel and uses the KDE 4.9.2 desktop environment. Out of the box you get some basic tools including the Firefox web browser, a few games, a document viewer, some media player apps, and and a few utilities.

What makes Slax cool though, is its modular approach to software. Instead of downloading and installing apps one-by-one from an app store or package manager, you can simply add a Slax module to your flash drive and either load it every time the operating system boots or just when you need it.

You can also build-your-own Slax system before you even download anything, but that feature isn’t yet available for Slax 7.

Matějíček also plans to sell 16GB USB flash drives loaded with Slax 7 for $25 each starting later this year. But you can take the release candidate for a spin by downloading the latest version from the links at Matějíček’s blog. It’s available in 32-bit and 64-bit varieties, and ISO or TAR versions.

You can burn the ISO version to a CD or open it using a virtual machine such as VirtualBox. Or you can download and unzip the TAR version to a USB flash drive to make it into a bootable Slax 7 drive.