So you’ve got a Samsung smartphone and every now and again you wish it had a larger display… but you don’t want to spend money on a separate tablet. A company called Skywood thinks they have the answer: a tablet dock designed to work with Samsung Galaxy S2, S3 and S4 smartphones. There’s also a version that works with the iPhone 5s or iPhone 5c.

It’s called the Skywood PhonePad, and the company is showing it off at the HKTDC show in Hong Kong this week, where the folks at Mobile Geeks spotted the unusual smartphone accessory. 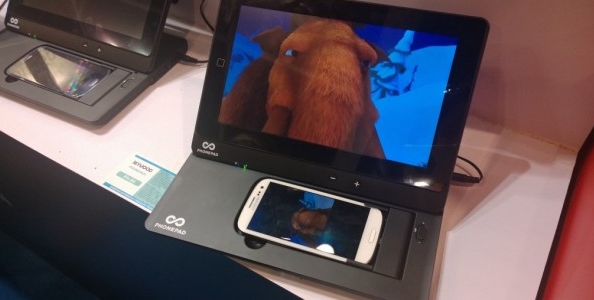 Basically the Skywood PhonePad is a device with a 10 inch display that you can flip up so it stands up sort of like a laptop, letting you watch movies, view presentations, or perform other actions on a bigger screen.

You can slide the smartphone into a hole in the case, and if you want to use the device like a tablet, just slide the screen back down so it covers the phone.

The PhonePad doesn’t have its own processor, so all apps, videos, or other content are actually running on your phone while the device acts as an external display.

Unfortunately it’s not a very good external display. The Skywood PhonePad has a 10.1 inch, 1024 x 600 pixel display with poor viewing angles, which means it’s bigger than your phone’s display, but it probably has a lower screen resolution and doesn’t look as good.

Still, I suppose it could come in handy if you just need a bigger screen from time to time, and it should be relatively cheap. Skywood is selling the PhonePad to vendors in batches of 1,000 units for about $107 each, which means it’ll probably sell for around $150 or less at retail.

That makes it a lot cheaper than an Asus FonePad, a smartphone/tablet hybrid with a higher quality screen, but with a tablet dock that only works with the phone it came with.

One reply on “Skywood PhonePad is a tablet dock for iPhone, Samsung Galaxy phones”