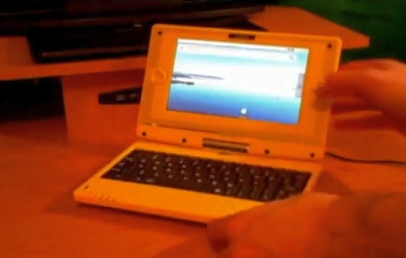 The Skytone Alpha 680 is one of the first netbooks to ship with the Google Android operating system preinstalled. And to be honest, Android might not be the best choice for this netbook. The company clearly didn’t spend a lot of time customizing the OS to play well with the hardware, and instead basically threw the version of Android used on cellphones onto a clamshell netbook. On the bright side, the netbook does feature a 7 inch, 800 x 480 pixel touchscreen display that can be folded over the keyboard for use in tablet mode, which makes the device a bit more smartphone-like.

The folks at Rokland picked up an Alpha 680 recently to see how well Google Android works with the WiFi adapters the company sells. But since there hasn’t been much information about the 680 published since earlier this year, the company decided to go ahead and post a video overview, which you can see after the break. Rokland will post a full review on the company’s blog soon as well.

Overall, Rokland wasn’t particularly impressed with the netbook design. It’s rather clunky looking, has an unattractive yellow finish, and doesn’t really take advantage of all Android’s features. For instance, the display orientation doesn’t auto-rotate when you rotate the screen. And flicking from one window to the next with your finger is difficult.

For a little while this summer it looked like Google Android on netbooks might be the next big thing. We even saw some machines running Android and a version of the Firefox web browser that appeared to have been ported to run on the OS. But now that Google is pushing its upcoming Chrome operating system for netbooks, it seems likely that Android will remain confined to cellphones with the odd exception here and there like the Skytone Alpha 680.