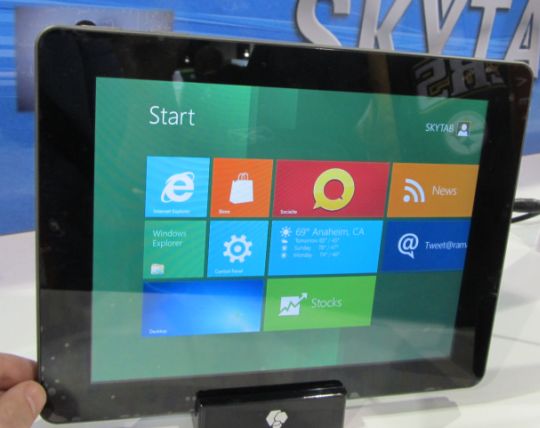 The Skytex SkyTab S is a tablet with a 9.7 inch, 1024 x 768 pixel display and a 1.5 GHz Intel Atom N550 dual core processor. It’s available today with Windows 7, but later this year Skytex will offer a version with Windows 8 — and this week the company is showing off Windows 8 on the tablet at CES.

The $699 tablet has 2GB of RAM, a 320GB hard drive, and a 5-point multitouch capacitive touchscreen. I haven’t had a chance to play with Windows 8 extensively on the tablet, but at first glance it appears to be quite snappy.

Skytex had originally considered releasing the SkyPad S with a single Core Atom N455 processor, but opted for the dual core model for better performance. It seems to have been a wise decision, as the tablet definitely feels a little snappier than some of the single Core Atom tablets with Windows I’ve tried in the past.