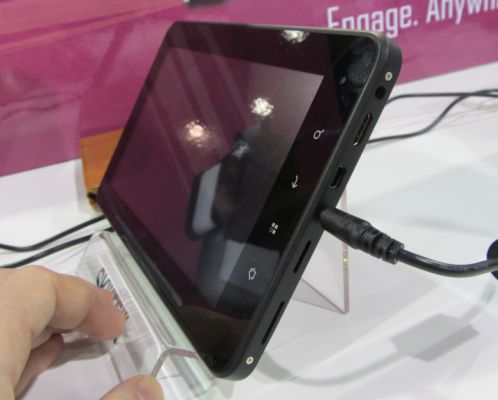 Skytex is expanding its line of inexpensive Android tablets with a few new models designed to run Google Android 4.0 Ice Cream Sandwich. The company will soon offer an ICS update for the SkyPad Alpha 2 tablet. It will also introduce two new models, the Skyad Omega and the SkyPad Argos.

Both tablets feature 1.2 GHz single core processors and Mali 400 graphics with support for 1080p HD video. They’ll also both have 8GB of storage and capacitive touch panels with support for 5-point multitouch input.

One of the features that sets the Omega apart from almost every Android tablet on the market is that it will have a removable battery.

The Argos has a removeable back panel — but the battery isn’t accessible. The point of the removable rear panel is that users can customize the tablet by slapping on a different cover with a different color.

Skytex hopes to ship the new tablets during the first half of 2012, with prices starting at around $199 for the SkyPad Argos.

While the company has a working prototype of the 7 inch Argos tablet, there’s only a mockup of the 8 inch Omega at the moment, which is why some of the photos in the gallery show a hand-made block of plastic with a picture of an Android home screen on the front. But Skytex is showing off an 8 inch tablet with similar specifications, and it seems to perform quite well.

Skytex sort of made a name for itself last year by introducing the Primer Pocket, one of the cheapest… and lousiest Android devices available. The company knows that Primer Pocket isn’t a very good device, which is why it’s priced at under $100.

But the Android 4.0 tablets Skytex has on hand at CES have better displays, better build quality, and faster processors. Overall they seem like reasonably good Android tablets for the price.