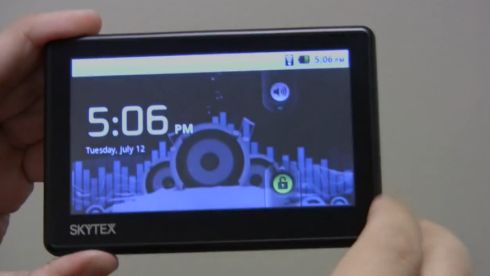 The Skytex Primer Pocket is a $99 Android device with a 4.3 inch display and a support for multitouch. It’s expected to start shipping the week of August 15th, and it’s one of the cheapest pocketable Android devices I’ve seen, which could make it a good option if you’re looking for a budget device for viewing media, surfing the web, or playing games.

But while the device generated a bit of excitement when we first spotted it a few days ago, the company has posted a few videos on YouTube which should probably lower your hopes or expectations. The Primer Pocket is certainly an impressive device given its low price… but you still get what you pay for.

Update: You can find more details in our complete review of the Skytex Primer Pocket.

In this case that includes a resistive touch screen which doesn’t appear to respond to finger input as well as more expensive capacitive touch panels, and a 600 MHz MIPS Xburst processor with a 400MHz DSP for video playback which offers mediocre performance when it comes to running Android apps.

The good news is that despite the resistive touch technology the handheld device does support two-finger touch gestures such as pinch-to-zoom. The bad news is that there appears to be a bit of a stutter in the graphics when you do pinch to zoom.

That said, the Primer Pocket seems to handle video playback quite well, and some games seem to run nicely as well. While I wouldn’t expect the same kind of performance we’ve come to expect from high-end phones and tablets with speedy processors and high quality displays, this little guy doesn’t look all that bad for a $99 pocketable media player/internet tablet.

While you don’t get official Google Android Market support on this Android 2.2 device, Skytex preloads the GetJar app store and it’s easy to install alternate markets such as the Amazon AppStore or SlideMe.