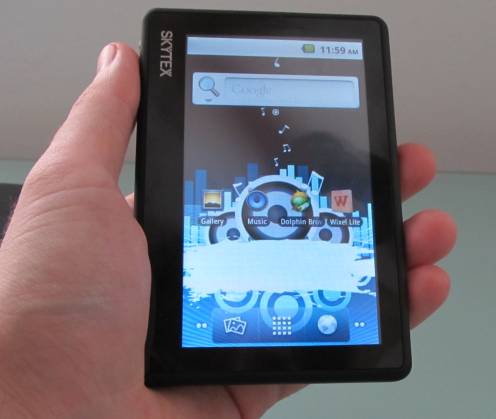 The Skytex Primer Pocket is a handheld Android device that’s not much larger than a smartphone. It has a 4.3 inch widescreen display and runs Google Android 2.2. The best thing about this little guy is the price: You can pick one up for as little as $89.

While it was a lot easier to get excited about the prospects of an Android tablet for less than $100 before HP went and started liquidating TouchPad tablets for $99, the Primer Pocket is still one of the cheapest Android devices on the market today.

Skytex sent me a demo unit to review, and as you’d expect, you kind of get what you pay for. The Primer Pocket does a few things really well. Others? Not so much.

Update: You can find more details in our Skytex Primer Pocket review.

The Primer Pocket has a 480 x 272 pixel, resistive touchscreen display with support for two-finger gestures such as pinch-to-zoom. There’s a g-sensor for automatic screen rotation, 256MB of RAM, and 4GB of storage space, although there’s only about 2.6GB available for user storage. It also supports microSD cards up to 16GB for additional storage.

The device runs Google Android 2.2 Froyo and has a 600 MHz MIPS processor. It doesn’t come with the Android Market, but Skytex ships the device with the GetJar app store, and you can install other third party app marketplaces including SlideMe and the Amazon Appstore.

I’ll have a more detailed review soon, but after spending a day with the device, here are some of my first impressions.

If you do nothing but use the Skytex Primer Pocket to watch videos, you may find it to be worth the $89 asking price. So far I’ve loaded two video files, a standard definition Xvid file and a 720p high definition DiVX video and both have played perfectly without any stuttering

Pinch to zoom works in the web browser, and once web pages are fully loaded scrolling is also smooth.

A number of third party apps do run on the mini-tablet, and typically if I have to choose between a web app and a native app you’ll get a better, smoother, faster experience from the native app, since the web browser is pretty slow.

The speaker is reasonably loud and clear for a device this small, and internet radio streams sound pretty good.

While videos play smoothly, you’re going to want to hold the Primer Pocket directly in front of your face. The viewing angles are awful, and if you tilt the device in any directions you won’t be able to see much of anything at all.

The tablet is also very slow. While some activities, such as automatic screen rotation, or navigating the home screen and app drawer are pretty smooth, it takes a long time for some apps to load, and once they’re loaded some of those apps are barely playable. Angry Birds, for instance, looks like a high speed slideshow.

The web browser takes a very long time to render most web pages, although some mobile pages load pretty quickly. While you can use this device to surf the web or run apps, it’s probably best to think of it as a portable media player that can do a few other things in a pinch.

Many apps simply don’t support the MIPS processor. For instance, while I was able to download TuneIn Radio, FieldRunners HD, and a number of other apps from the Amazon Appstore, they all failed to install properly.

Because there’s no marketplace filled with apps guaranteed to work on the Primer Pocket, you may find yourself downloading app after app to find ones that work. I tried installing half a dozen internet radio apps before I discovered that RadioBee works. Pandora also works on the tablet.

Popular eBook apps including Aldiko and FBReader are also unsupported, although Moon+ and Amazon Kindle apps both work.

There are also at least a few apps that install properly… but which don’t play well with the 480 x 272 pixel display. For instance when I installed the Boggle-like game Wixel, one row of letters was cut off, which makes it a bit difficult to form words.