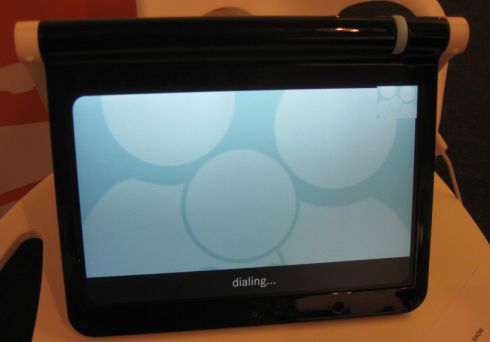 The Litl Webbook is a $399 internet appliance that’s sort of a cross between a netbook and a souped up digital picture frame. When the company first introduced the product with a $699 price tag, I was skeptical. And to be honest, now that the price is $399, I’m still a bit skeptical that there’s a market for the Webbook — or at least that the market isn’t already being better served by products like the iPad. But the folks at Litl are pushing ahead with their vision of an internet-connected device that’s so easy to use that you can hand it to your non-tech-savvy grandparent or a toddler.

The company’s latest announcement is that Litl has partnered with Skype to let users make voice and video calls using a Litl Webbook.

The concept behind the Webbook is that users won’t have to (or be able to) install third party apps. So the Skype app will be baked right into the operating system. New customers who pick up a Litl Webbook this fall will have Skype preloaded. Existing users will get it through an automatic software update — although you’ll have to reboot the Webbook for the software to initialize the first time.

The software isn’t quite ready yet. I got a chance to check out a demo unit this week and only voice calls were up and running. But the full version should be ready in the fall.

This was also the first time I got a chance to play with the Litl Webbook in person. I have to say, the keyboard is surprisingly responsive and comfortable to use, although the keys actually feel a little larger and more spread apart than I’m used to. And navigating to web sites and web-based apps was easy and intuitive.

I can see how it really would make sense for someone who doesn’t user a computer very much or only needs to navigate to a couple of web pages — every time you open a new web page, a thumbnail is saved on the home screen. You can delete bookmarks you don’t want, but if you regularly visit hundreds of web sites, this could get old pretty fast. But the Webbook isn’t really aimed at heavy internet users. It’s aimed at the sort of person who wants to check their email, watch some online video, and see the latest weather forecast and maybe perform a half dozen other activities regularly — but not much else. 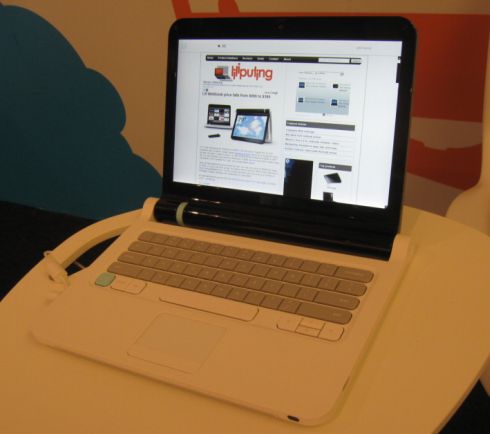 The test unit I saw seemed a little buggy, but that could be due to the lousy WiFi at the event I was attending and/or the fact that it’s running beta software with an early version of Skype loaded. We did see a few error messages pop up which aren’t going to make a lot of sense to inexperienced computer users. Fortunately turning the computer off and on again fixed everything. I suspect that rebooting the computer is the number one tip in the Litl troubleshooting guide.

The Litl rep also tried to show me how the machine handles Flash video. It’s supposed to be able to play HD Flash content, but to be honest, it struggled with full screen video from Hulu. In order to play properly, you’re supposed to open the video, click the pop out button to open the video in a standalone window, then rotate the Webbok into easel mode — but every time he did that, a message popped up saying the video was done playing. It played fine if you left the device in a normal laptop mode.

The Easel mode is interesting though. There’s no touchscreen, but you can navigate through web pages and web apps using a scroll wheel on the hinge and a button on the side of the laptop. You can also use an optional Infrared remote control to navigate.

I’m still not sold on the idea of a device that only runs web aps. But hey, Google seems to think it’s a good idea, so maybe Litl is on to something.