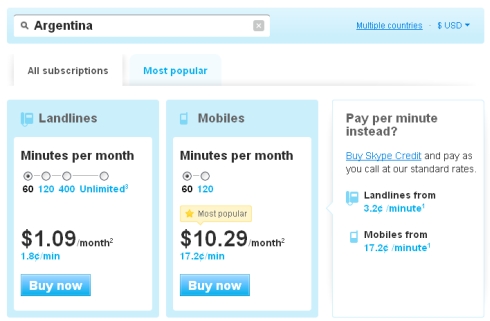 Skype lets you make free voice and video calls to other Skyper users anywhere on the planet — assuming they have Skype installed on their computer or mobile phone. But Skype also lets you make Skype-to-Phone calls using SkypeOut credits. You can either pay by the minute or purchase a monthly plan. Up until now, the only way to get a monthly plan was to pay for unlimited calls — with several different tiers of service including a global plan, and a US-only plan.

But this week Skype rolled out a new set of plans that let you make calls to more than 170 countries at cheap rates. You can purchase a subscription that lets you call either landlines or mobile phones in those countries. And you can sign up for limited plans starting at 60 minutes per month with prices as low as $1.09 per month. when you go over your minutes, calls will be billed at Skype’s normal rates.

If 60 minutes won’t do it, you can also sign up for longer plans.

So, say you want to purchase a 60 minute monthly plan to make calls to mobile or landline phones in Australia. That’ll be $10.29. Only want to be able to call landlines? $6.99/month will give you unlimited access, while $2.09/month will be enough to get you 120 minutes per month. An unlimited US & Canada plan still costs just $2.99 per month and includes Guam and Puerto Rico.

Skype plans are generally cheaper than making international calls on a phone, and these monthly plans generally seem to give you better rates than paying by the minute.