Microsoft’s cloud storage and sync app SkyDrive will soon be reborn as OneDrive. The change became necessary after Microsoft got into a trademark dust-up with British broadcaster Sky.

Why OneDrive? Microsoft’s probably planning to pitch it as the one drive to store all your files from all your devices, for starters. It’s also a way to unify branding across properties. Xbox One, meet OneDrive. 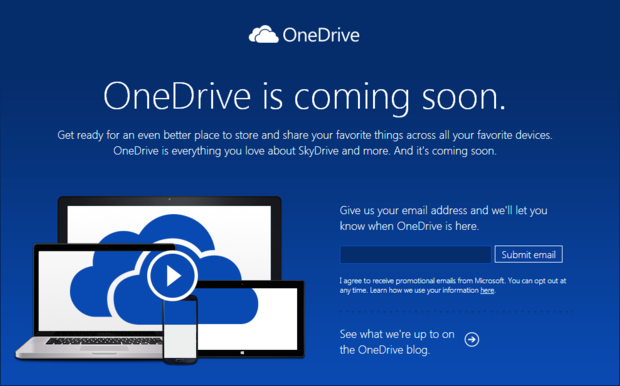 The change isn’t going to happen right away. Microsoft is laying the groundwork now by getting the new domain name and blog ready to go, and they’ll start pushing out application updates once all the behind-the-scenes work is done.

If all goes smoothly, you won’t notice any changes — unless you hover the system tray icon. On Android and iOS your app icon will update and sport the OneDrive name but there probably won’t be a radical difference between the last SkyDrive apps and the first OneDrive apps.

SkyDrive’s renaming may only be the beginning. Microsoft could choose to brand the next big evolution for Windows as Windows One — as in one operating system for all your devices. Sure, there was already a Windows 1.0 but that was a long, long time ago.

With Microsoft focused on platform unification and an Apple-style release cycle for future “Blue” OSes, the One branding makes sense. There’s an implication of simplicity and minimalism, two adjectives that Microsoft uses frequently when talking about the Metro/Modern design.

Once consumers have gotten comfortable with Xbox One and OneDrive, why not keep the unification ball rolling?

3 replies on “SkyDrive will be reborn as OneDrive”