The Finney is a smartphone with a 6 inch display, a Qualcomm Snapdragon 845 processor, 6GB of RAM, 128GB of storage, and… a bunch of features that let you use the phone as a cold storage wallet for cryptocurrency.

Sirin Labs unveiled plans to launch the Finney earlier this year and now it’s up for pre-order for $899.

That’s $100 off the list price… but Sirin says you’ll need to pay with SRN tokens for now, which means you have to buy into the company’s cryptocurrency to purchase the phone.

There’s no word on when the phone will ship though. 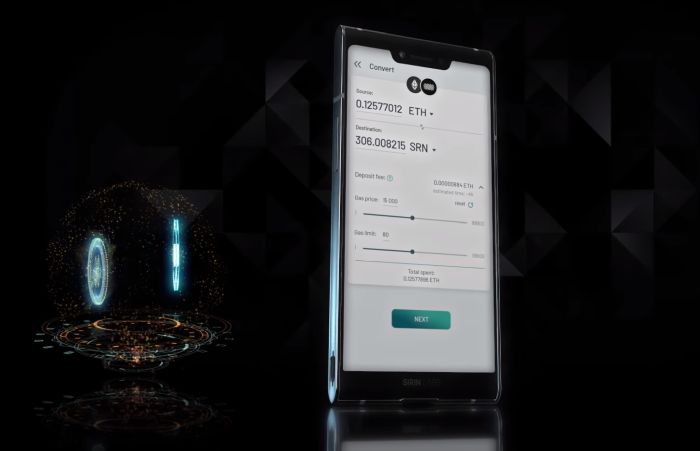 What makes the phone unusual are a combination of hardware and software features designed to make the Finney a “blockchain phone.”

There’s a 2 inch “Safe Screen” on the back of the phone which uses dedicated hardware and software to let you access your cold storage wallet independently from the rest of the phone. There’s even a separate power button for this screen.

The phone also runs a modified version of Android called Sirin OS. While you still have access to Google apps and services (including the Play store), there’s a native crypto wallet application and support for dApps (decentralized applications).

The Finney also has features for secure voice, text, and email communications, a “Token Conversion Service” that lets you make payments in a variety of supported cryptocurrencies without first going through an exchange. At launch, the service will support Bitcoin (BTC), Etherium (ETH), and Sirin Labs tokens (SRN).

Sirin was one of the first companies to announce it was working on a blockchain phone, but it wasn’t the last. HTC started taking pre-orders for its HTC Exodus 1 blockchain phone in October, and the company says it’ll start shipping next month.