Small form-factor desktop computer company Simply NUC has introduces two new computers that look nearly identical on the outside, but which feature different hardware on the inside.

The Simply NUC Topaz is a mini PC with an Intel Tiger Lake processor, Intel Xe graphics, and a starting price of $559, while the Simply NUC Ruby is available with AMD Ryzen 4000U processor options for $519 and up.

Those starting prices will get you a computer with 4GB of RAM, a 128GB solid state drive, and either no operating system or Ubuntu Linux. You can pay extra for up to 64GB of memory, up to 10TB of storage, and/or Windows 10.

The Intel-powered Topaz also has a DisplayPort 1.4 port, while the AMD-powered Ruby has DisplayPort 1.2. I’m also told that while the Topaz has “Thunderbolt capable” ports, the USB-C ports aren’t certified as Thunderbolt 4. Simply NUC will be releasing a list of peripherals that have been tested in the future.

The company offers three base configurations of each model:

The Simply NUC Ruby is available for purchase and ready to ship this month, while the Topaz is scheduled to ship in January.

The company also plans to offer barebones models without any memory and storage for customers who would prefer to bring their own. Prices will start at $370 for a barebones Ruby/AMD model and $410 for a barebones Topaz/Intel version, but as of December 9, 2020 there doesn’t seem to be an option to configure a barebones system on the Simply NUC website yet. 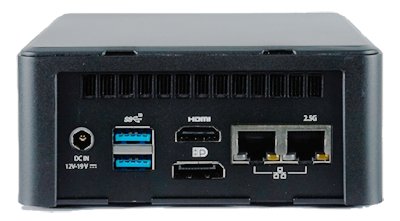 Interestingly Intel is also expected to introduce a new NUC with Intel Tiger Lake processor options this month, but it seems Simply NUC beat the chip maker to the punch with an announcement… even if the Topaz isn’t going to ship for another month or so.