So you want to run Ubuntu Linux on an Intel Compute Stick, but don’t want to buy the model that comes with Ubuntu pre-loaded… because it also has half the RAM and one fourth as much storage as the Windows model?

As I noted when reviewing the Intel Compute Stick with Windows, you can load Ubuntu yourself. But WiFi doesn’t work out of the box, which severely limits the utility of this tiny computer. 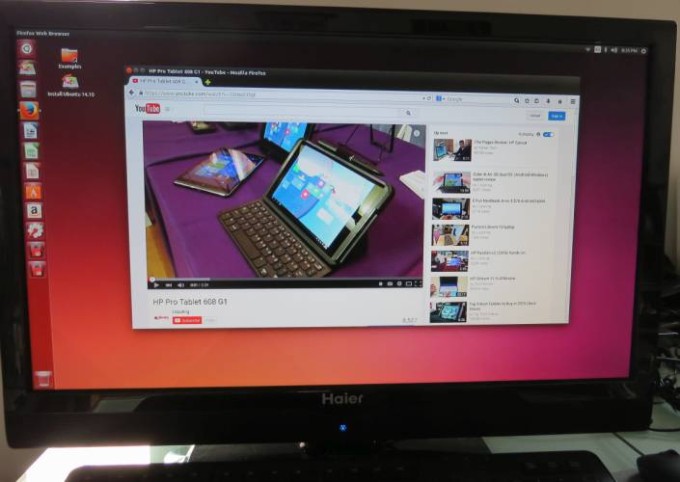 There’s a rather complicated method for compiling your own working build of Ubuntu for the Compute Stick… or you can just download Ian Morrison’s pre-compiled build.

Update: Want a (somewhat) easier method for installing a version of Ubuntu that’s inspired by the software that comes with the Ubuntu version of the Compute Stick? We’ve got you covered.

Just follow our new step-by-step tutorial to get Ubuntu 14.04.2 LTS 64-bit with working WiFi, Bluetooth, and audio up and running.

But you might still want to follow the steps below instead, even though they’re a little more complicated?

Why’s that? Because the method detailed in this post lets you install Ubuntu 64-bit software, while using a 32-bit bootloader. That makes it possible to dual boot Ubuntu and Windows. Just select the OS you want to run when the PC boots.

The other method will only let you run either Ubuntu or Windows. Any time you want to switch, you’ll have to make some changes to the bootloader.

Morrison’s been trying to get Ubuntu up and running on the Compute Stick and other tiny computers with Intel Atom processors for a while, and he’s been using me as a guinea pig trying to find a way to get Ubuntu to load as quickly and easily as possible.

His latest build is based on a 64-bit version of Ubuntu 14.10 and includes working WiFi, Bluetooth, graphics, and audio…

Update: Morrison has updated his 64-bit Ubuntu 14.10 image, and he also offers a 64-bit Ubuntu 14.04 LTS image. Both versions now support audio as well as WiFi and Bluetooth. But if you want to dual-boot Windows and Ubuntu rather than just running Ubuntu, you may still want to follow the steps below to install Ubuntu and then replace the bootloader with a 32-bit version.

You can find more details at Morrison’s Linuxium website, and I’ve tried to document the steps I took to create a fully-functional Compute Stick setup that can dual boot Windows 8.1 and Ubuntu 14.10 below.

Note: Getting Ubuntu to run from a Flash drive is pretty easy. Installing it to a microSD card takes a little more patience. Applying all the patches can be a time-consuming process. It took me many hours to get everything to work properly. The instructions listed below explain what worked for me… but they may not be foolproof or work for everybody. You’ve been warned.

This version of Ubuntu should also work with most tablets, TV sticks, and other computers featuring Intel Atom Bay Trail processors, although the UEFI/BIOS options may differ on some models. Keep in mind that this guide was written specifically for the 2GB/32GB Intel Compute Stick that comes with Windows software, and there’s no guarantee that following these steps will work on other systems.

Boot from an Ubuntu liveUSB

1. Download the ISO image for the latest Linuxium version of Ubuntu 14.10 for the Compute Stick.

3. Connect a USB hub to the USB 2.0 port on the Compute Stick, and connect a mouse, keyboard, and the flash drive you prepared in step 2. 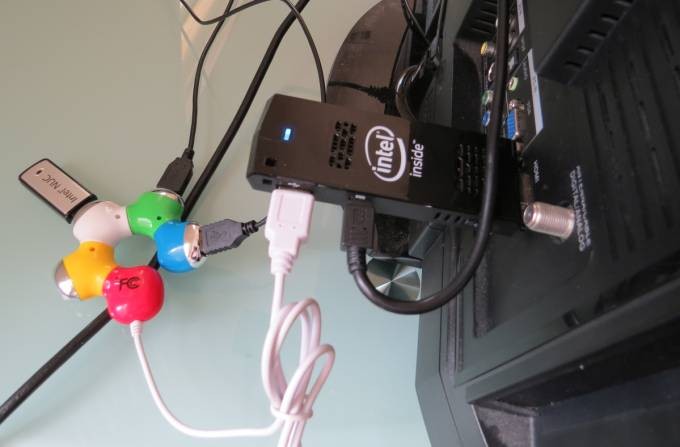 4. Turn on the Compute Stick and press F2 right away to get into the UEFI Setup menu.

5. Change the “Select Operating System” option from Windows to Ubuntu. 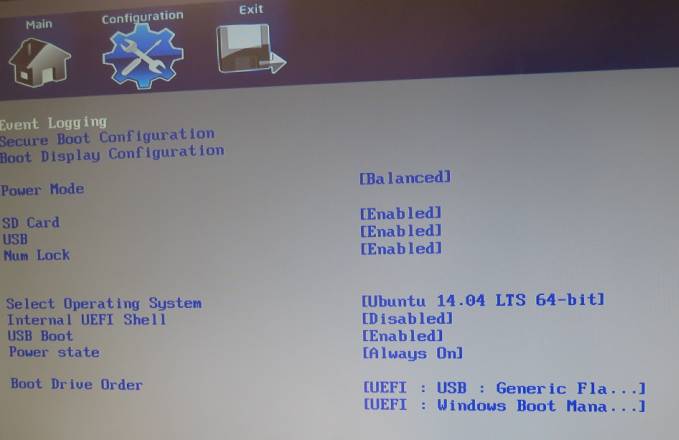 6. Save your changes and exit.

7. While your Compute Stick reboots, press F10 to get to the boot options menu. 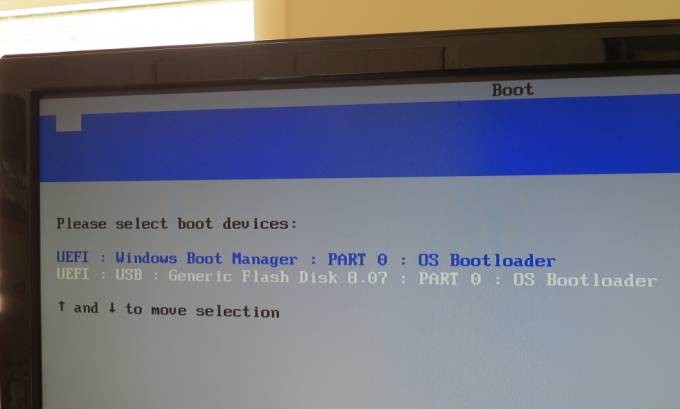 9. A moment later GRUB will launch, asking if you want to try Ubuntu without installing or install it. I’d recommend trying it first.

10. Wait a few minutes and you should be greeted with the Ubuntu Unity desktop. 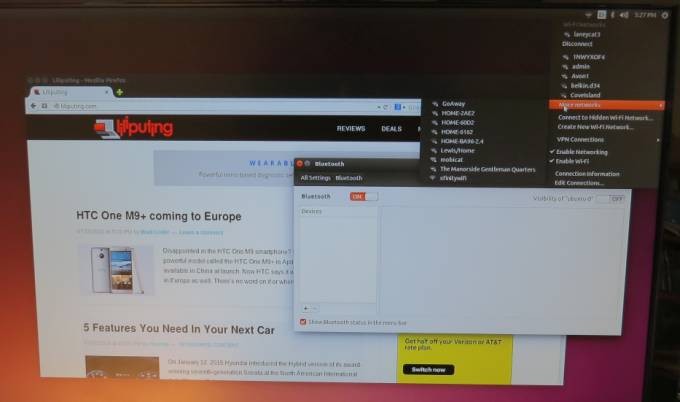 From there you can choose try out the operating system or choose to install Ubuntu on your Compute Stick with 2GB of RAM and 32GB of storage.

Install Ubuntu to a microSD card

Here are the steps to install Ubuntu on a microSD card and then use a 32-bit bootloader to enable audio. Note that these steps can be a bit finnicky: my Compute Stick froze several times before the process was complete and I had to reboot and start over.

I should also point out that neither Ian Morrison, nor I are responsible if you make a mess of things by following these instructions. You will alter the Compute Stick’s bootloader and you may end up erasing Windows altogether if you make a mistake.

1. Do everything listed above in the “boot from a liveUSB section,” but this time when you insert the USB flash drive to boot Ubuntu, make sure an 8GB or larger microSD card is also inserted in the Compute Stick.

2. Once Ubuntu is up and running, double-click the “Install Ubuntu” icon on the desktop.

3. Follow the on-screen instructions, but when asked how you want to install, choose “Something else” for installation type and scroll down until you find the “/dev/mmcblk1” option — this should be your microSD card. 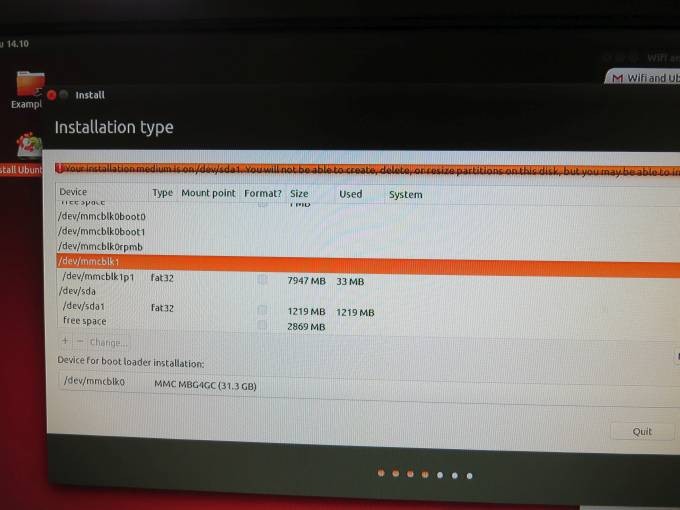 4. Choose “New Partition Table” for mmcblk1 and the hit the + icon to create a new partition using Ext4 journaling file system and / as the mount point. 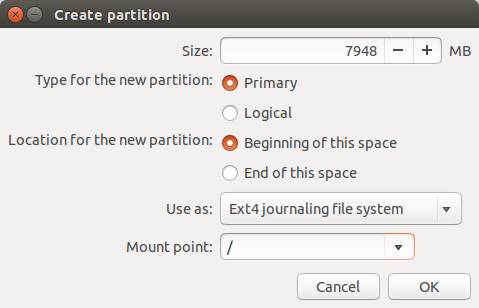 5. Once you’ve finished selecting your install point, the Ubuntu installer will ask you for your time zone, keyboard layout, and a username and password. Then just sit back and wait for the installer to finish.

6. When it’s done, reboot your device and remove the USB flash drive.

7. You should automatically see the GRUB bootloader and an option to launch Ubuntu. If you do not, you can hit the F10 key at boot to bring up the boot menu and make sure you’re booting from the microSD card.

Once Ubuntu loads, you’ll want to install the 32-bit bootloader  if you want to create a dual-boot setup that can load Windows or Ubuntu at boot.

If you’re happy just running Ubuntu, you’re all done. But if you want to dual-boot, read on.

Installing a 32-bit bootloader (for dual-boot)

Note: If you installed Ubuntu without first connecting to the interent, you may need to perform this step before entering the next command: Open a terminal window and type the following (without quotes): “sudo apt-get update,” and then enter your password and wait for the text to finish flying by.

This should replace your 64-bit bootloader with a 32-bit version. 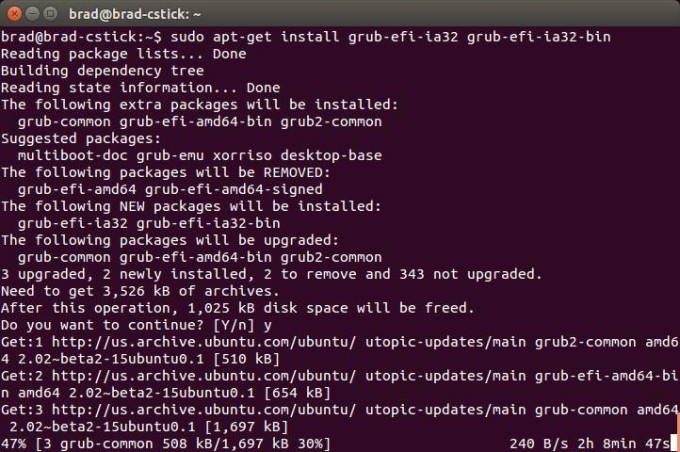 2. Reboot your computer again, and this time hit F2 to return to the BIOS/UEFI settings menu. Change the operating system from Ubuntu 14.04 to Windows 8.1. Save and exit.

Yes, I know — you’re telling it to boot Windows in order to load Ubuntu. Bur really what you’re telling the Compute Stick to do is to use the 32-bit bootloader.

3. Hit F10 to bring up the UEFI bootloader. You should now only have one option, marked “ubuntu.” Choose it. 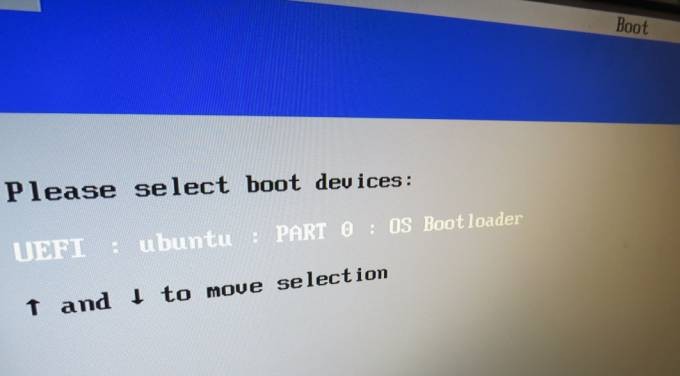 Theoretically you could skip this step and let the PC load the GRUB bootloader manually. But for some reason this doesn’t always seem to work for me.

I can choose the Windows option from GRUB with no problem, but Ubuntu always hangs. So I’d recommend always hitting F10 and choosing ubuntu at this point. 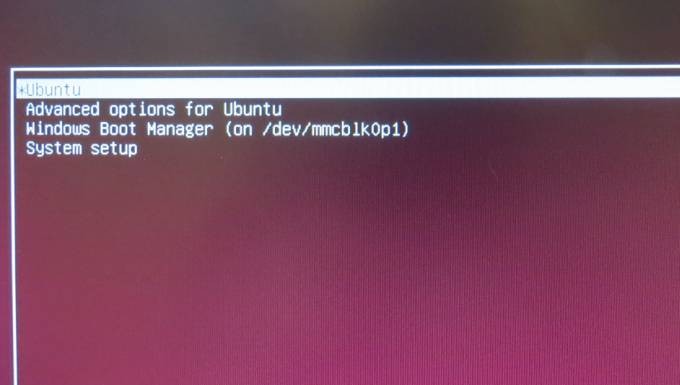 4. When that’s done, reboot your system and you should be able to load either Window or Ubuntu… and when you’re running Ubuntu, the audio should work properly.

Note that you may still need to hit F10 and choose Ubuntu every time you boot the Compute Stick. But once you do that, everything should work pretty much perfectly, including WiFi, Bluetooth, and audio.

If you install Ubuntu to a microSD card, you will still need to install the bootloader to the Compute Stick’s built-in storage. That means from now on, Ubuntu will load by default if you don’t touch anything when you turn on your computer. But you can choose Windows from the GRUB menu.

Want to remove Ubuntu and go back to using Windows only? Boot into Ubuntu, open a terminal, and type “efibootmgr” to see the list of boot entries. Then type “sudo efibootmgr -b [the number of the entry you want to remove] -B” to remove. 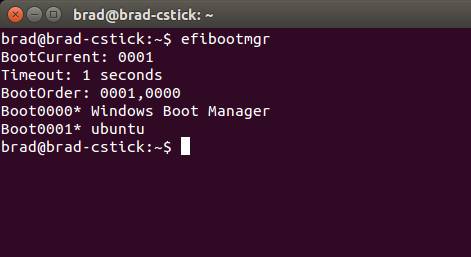 For example, if you see Boot0000 Windows Boot Manager and Boot0001 ubuntu, you would type “sudo efibootmgr -b 1 -B” to remove Ubuntu.

After that’s done, you should be able to remove the microSD card and go back to using the Compute Stick as a Windows-only device.