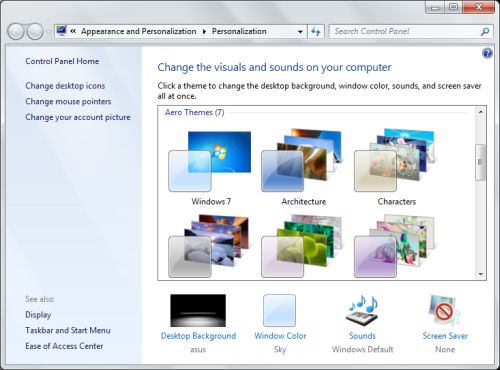 Windows 7 Starter Edition is a low cost version of Microsoft’s latest desktop and notebook operating system which the company makes available to netbook makers. Under the hood there’s really not much difference between Windows 7 Starter and higher priced versions of the operating system. But in order to create a different value proposition, Microsoft has left out a few features including personalization options.

If you buy a netbook that comes with Windows 7 Starter, you won’t be able to change the desktop background or user the Aero Glass desktop effects with transparent borders, live thumbnail previews of running apps from the taskbar, and other graphical enhancements.

But while some folks seem to be under the impression that these features were left out because netbooks with low power processors can’t handle them, the truth is they were simply left out because Microsoft wanted to give users a reason to pay for upgrades while giving PC makers a low cost operating system to help keep netbook prices low.

Now Vishal Gupta has posted a tool which you can run on any computer running Windows 7 Starter (or Windows 7 Home Basic) to add support for wallpaper switching and Aero Glass. Basically when you run the tool it will patch some Windows system files to enable personalization features that work exactly the way they would on Windows 7 Home Premium or Ultimate. All you have to do is download and run the file, and reboot your computer.

You can uninstall the patch by running the executable file again.

I don’t have a netbook with Windows 7 Starter handy to test this right now, but I’ve seen multiple reports that it works as promised. I’ve also noticed that on the Windows 7 Starter-powder netbooks I’ve tested over the past few years, I’ve never been particularly disturbed by the lack of Aero Glass or desktop background changing… but those have never been high priorities for me.