The Intel Next Unit of Computing (NUC) is a tiny desktop computer with an Intel Core processor, a few USB ports, HDMI ports, and pretty much everything you’d expect from a desktop. It’s just smaller than most desktops, measuring a bit over 4 inches by 4 inches square.

Despite the small size, the Intel NUC generates a bit of heat and the standard design includes a fan to keep the system cool. But that means the mini-computer makes a small amount of noise, which can be distracting if you plan to use an NUC for a home theater PC. 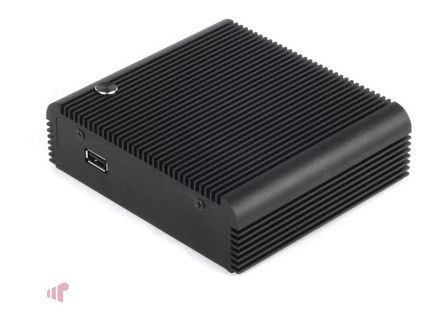 The company is working on a new case for Intel’s NUC which includes build-in heat sinks. The passive cooling system should help keep the computer from overheating even without any fans blowing out hot air.

The case is a tiny bit larger than some of the other NUC cases I’ve seen, in order to accommodate the fins on the heat sink. But even with this sort of case, an NUC would be much smaller than a typical desktop computer.

Part of the reason is that an NUC system doesn’t have to be large enough to hold a standard hard disk. Instead it uses a solid state disk which is faster, and which also takes up less space.

SilverStone’s NUC chassis is still just a prototype at the moment, but the company could eventually offer it as a solution for folks looking to make Intel’s mini-PC into a silent computer.

SilverStone sells computer components including cases, power supplies, coolers, and fans. I don’t expect the company to actually sell a version of the NUC packed inside the new case. Instead, it would probably be sold as a standalone case that you can fit standard NUC parts into.

Newegg sells a barebones NUC system with a Core i3 processor but no memory, storage, or operating system for $300.