Laptop and desktop computers are dominated by x86 chips from Intel and AMD, while most modern smartphones and tablets ship with processors based on ARM designs (although the lines are blurring now that ARM-based Chromebooks and Windows PCs are a thing).

But company called SiFive has been working to shake things up for the past few years by designing processors that use open source RISC-V architecture.

RISC-V has been around for less than a decade, and up until now it’s been pretty far behind the competition in terms of performance. But this week SiFive unveiled its new U8-Series chip design which brings a huge performance boost and could result in chips that are competitive with modern ARM-based processors.

SiFive says the first two U8-Series CPU core designs include the SiFive U84, which is a high-performance, energy efficient core for a wide variety of applications, while the SiFive U87 is designed for “vector processing.”

The company isn’t saying much about the U87 yet, but here are a few details about the U84: 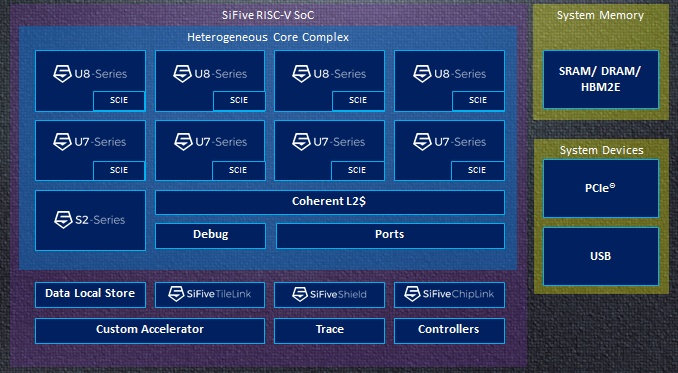 SiFive says when compared with an ARM Cortex-A72 CPU core, the U84 should offer 1.5X better performance per watt, and twice the area efficiency (meaning it should take up less physical space).

Of course, Cortex-A72 is a 3-year-old technology at this point, so it’s unclear how the U84 will stack up against the latest ARM designs licensed by chip makers including Apple, Qualcomm, Samsung, and Huawei. But considering the fact that the first Linux-ready RISC-V chip processor was only made available in 2017, it seems like SiFive is making pretty rapid progress.

If you want a deeper dive into what makes the U8-Series processors tick, AnandTech has an in-depth overview of the new technology.