Intel says it will use SiFive Performance P550 processor cores in its 7nm “Horse Creek” processor platform. It’s unclear at this point whether that means Horse Creek will just use SiFive’s RISC-V CPU cores or if they’ll be part of a multi-core solution that pairs RISC-V cores with Intel’s x86 processor cores (or something else altogether). But it’s still an interesting move, given the recent rumors that Intel was interested in acquiring SiFive. 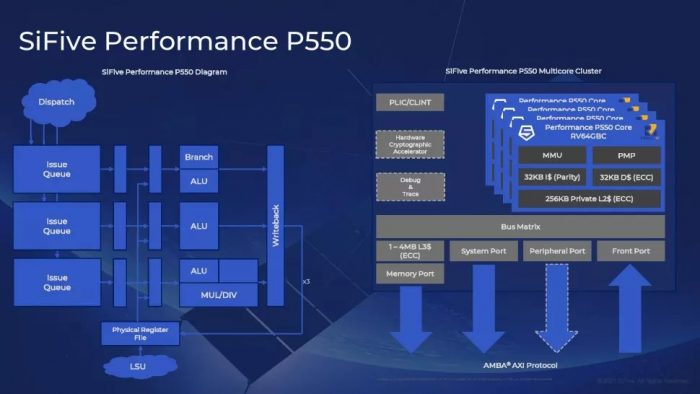 According to SiFive, the Performance P550 processor core builds on company’s SiFive U84 microarchitecture and features a “thirteen-stage, triple-issue, out-of-order pipeline.” SiFive says chips can pack up to four P550 CPU cores into the same amount of space as a single ARM Cortex-A75 CPU core, while offering better performance-per-area.

With a SPECInt 2006 socre of 8.65/GHz, SiFive says it’s the highest-performance RISC-V processor core so far.

The Performance P270 is less powerful, with a score of 4.6/GHz, but it’s also a smaller, and likely less expensive chip that features features an 8-stage, dual-issue, in-order architecture.