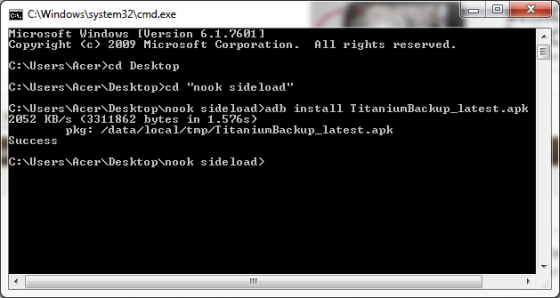 The Barnes & Noble NOOK Tablet is designed to let you download and install third party apps from the B&N shop, but shortly after the tablet was released users noticed that they could also install apps from other sources and even install competing app stores such as the Amazon Appstore and Google Android Market.

Then B&N rolled out software version 1.4.1 and suddenly it got harder to sideload apps that didn’t come from the B&N shop. But it’s not impossible.

Xda-developers forum member Indirect noticed that while you can’t simply download and install an Android APK installer on your tablet anymore, you can still use the Android Debug Bridge (adb) utility to push apps from a computer to your tablet.

This will probably only work if you already added support for third party apps and/or rooted the tablet before your NOOK was upgraded to OS 1.4.1. While the software update removes root access and kills the simplest methods for sideloading, it doesn’t wipe all of your files and settings.

2. Unzip the files to a folder on your computer. For this tutorial I’m going to pretend you put the files in a directory called c:\sideload\

3. Put the APK installer file you want to load on your tablet in the same directory.

4. Open a command prompt and navigate to that directory.

5. Connect your NOOK Tablet to your computer with a USB cable.

This method isn’t quite as easy as using the Android Market or Amazon Appstore on your tablet, but it does let you sideload apps on a tablet that’s running OS 1.4.1, even without root access.

If you’d like to downgrade to OS 1.4.0 so that you can root the tablet and install the Android Market, you can do that — but the process involve performing a factory reset so you’ll lose data and settings.

2. Place it on the root directory of a microSD card and plug it into your tablet.

3. Shut down your NOOK Tablet and restart it to restore to factory default condition with OS 1.4.0.

Once you’ve done that, you may want to check out our guides for rooting the tablet and blocking future software updates to make sure you don’t lose root access.