There are a growing number of ways to quickly and easily sideload Android apps on Windows 11. Shortly after writing about WSATools, the first Android app sideloader to hit the Microsoft Store, I became aware of a few more apps that do the same thing just as well.

WSA-pacman is described as a package manager and installer that lets you install Android APKs on the Windows Subsystem for Android, while APK-Installer is another Android app installer for Windows. Both are open source applications available for download from GitHub.

The Windows Subsystem for Android (WSA) is still in preview and only available to members of the Windows Insider program running beta or dev channel builds of Windows 11. While Microsoft makes it easy to install applications by bundling the Amazon Appstore with WSA, only around 50 Android apps are available so far, and even when that number grows, Microsoft and Amazon’s stores likely won’t have all Android apps – the Amazon Appstore has just around half a million apps while the Google Play Store available on most Android phones and tablets has millions.

That’s where sideloading comes in. Android makes it relatively easy to install apps that aren’t downloaded from an app store, and shortly after started a public preview of Android app support for Windows Insiders, I wrote about how you could use command line tools to sideload Android apps that aren’t available from the Amazon Appstore. But the original method involves running command line tools.

Since then, a number of developers have come up with easier solutions that let you do everything with a few mouse clicks thanks to graphical user interfaces.

WSATools may be one of the simplest methods for many users since you can download and install it directly from the Microsoft Store.

But I’ve actually had more luck getting apps to install properly when using WSA-pacman and APK installer. They just take a little more work to set up.

WSA-pacman is a lightweight tool that you can download and unzip to a directory on your PC. Then just double-click on the WSA-pacman file to run the app. 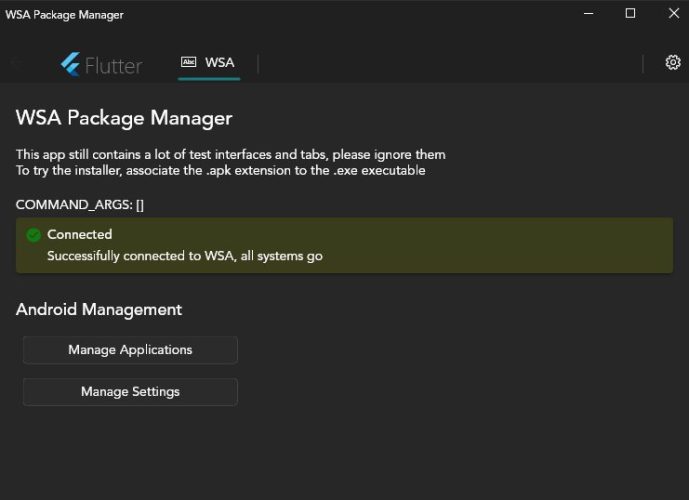 It will automatically connect to the Windows Subsystem for Android and set up the Android Debug Bridge for you. Click the Manage Applications or Manage Settings buttons to open the WSA screens for those functions.

In order to install an Android app using WSA-pacman, just download an APK from a trusted source, right-click on the file, and choose “open with.”

Since WSA-pacman doesn’t have an installer that hooks into Windows, you’ll need to first select the “Choose another app” option, then choose “More apps” on the following screen, and then finally scroll down to “Look for another app on this PC” to open a file browser that will you navigate to the folder where the executable is located.

Check the box to always open with this app, though, and you should only have to do this once. After that, you can just double-click on any APK file to open it with the WSA-pacman installer.

Once you do that, you’ll be greeted with a window that provides a little information about which permission the app requires and an “install” button. 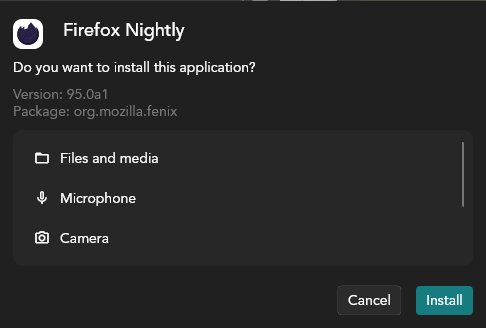 Click install to start the process, and in a moment you should see a new screen asking if you’d like to open the app. I found that clicking “open” doesn’t always work, but you should now be able to find the installed app from the Windows Start Menu.

This is another open source app that, once installed, allows you to double-click on any Android APK to open an installer window.

Like WSA-pacman, the installer will show which permissions an Android app requires in order to run, although it’s listed under “Capabilities” and includes language that’s a little more unwieldy. 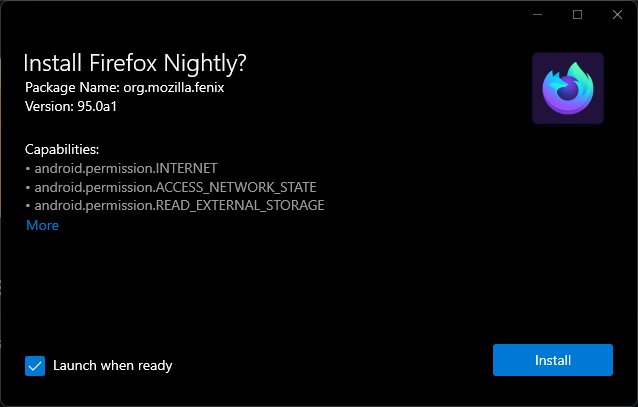 But for the most part this utility gets the job done the same way, and even has a box that you can check to optionally automatically launch the Android app once it’s installed. This seems to work much better than the open button in WSA-pacman, at least as of the time this article was published. Both apps are under active development, so things could change in the future.

One frustrating thing about WSA-installer is that the app itself is actually rather cumbersome to install.

The good news is that once it’s done, you don’t need to jump through a lot of hoops to associate APK files with WSA-installer, it will show up in the list of installed Windows applications. The bad news is that the recommended installation process involves:

But once you’ve gone through those steps, APK Installer, just like WSA-pacman, makes installing downloaded Android apps on supported Windows 11 devices as easy as installing any native Windows app.

Keep in mind that not all Android apps will necessarily work properly if they’re sideloaded. For example, apps that require Google Play services won’t function properly unless you jump through some extra hoops to install the Google Play Store and Google Services Framework, along with other Google apps and services.