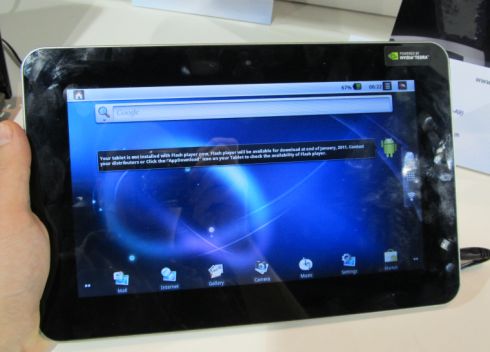 Shuttle is probably best known for producing small form factor PCs and barebones computers, but the company also has an ODM (Original Device Manufacturer) business going, where it builds laptops and tablets which other companies can order and rebrand to sell under their own name. This year the company is showing three new tablets at CES, including a pretty much state-of-the-art 10 inch model with NVIDIA Tegra 2, and two less ambitious tablets.

The tablet doesn’t really look all that different from other 10 inch Tegra models I’ve seen on the show floor this year, but that’s not necessarily a bad thing. The tablet has decent build quality and the screen is quite responsive. 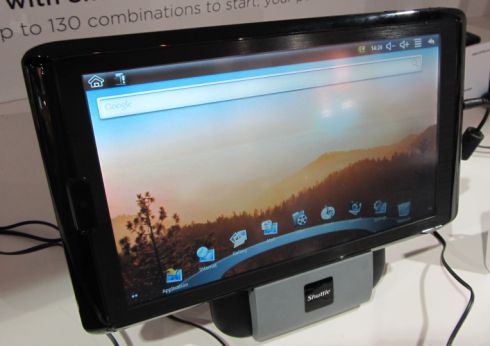 While Shuttle didn’t share any pricing information, the U10AV01 is clearly a budget model when compared with the P10. This model has a VIA WM8605 low power ARM-based processor and has a 10.1 inch, 800 x 480 pixel resistive touchscreen display.

This tablet didn’t feel as snappy as the Tegra model, and it runs the slightly older Android 2.1 operating system. The plastic case also has a much cheaper feel. 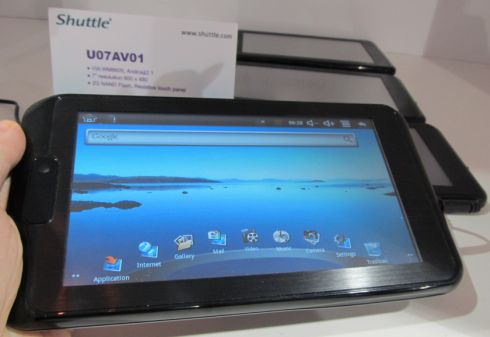 Rounding things out is the Shuttle U07AV01, which has the same basic specs as the U10, but a smaller, 7 inch resistive touchscreen display.

Again, I don’t expect Shuttle to sell any of these tablets directly to consumers. But don’t be surprised if you see these machines pop up in the not-too-distant future under different brand names.