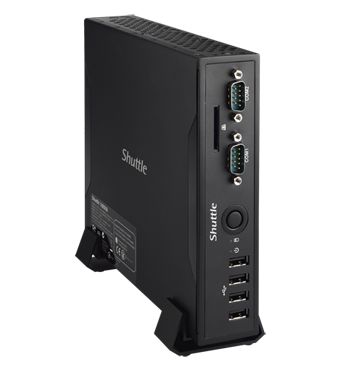 As a barebones system, the Shuttle DS437 doesn’t include memory or storage, but it does have 2 DDR3 memory slots, a 2.5 inch drive bay, and a wide range of I/O features including dual Ethernet jacks, HDMI and DVI ports, 2 USB 3.0 ports, 4 USB 2.0 ports, and RS-232 and other ports.

If you’re wondering about some of the odd ports, it’s because Shuttle is selling the DS437 as a “slim signage player” rather than a desktop computer. It’s marketed as a device that you can use to power digital signage, kiosks, thin clients, or other commercial applications.

But it’d also make a relatively inexpensive option for a small, fanless home theater PC. It only needs a 65W power adapter, supports up to 16GB of RAM, and has a CPU with integrated graphics which should be good enough for most HD video tasks. Just don’t expect to use a system with a Celeron 1037U chip and Intel HD graphics for bleeding edge gaming.