Shuttle has been making small form-factor PCs and computer cases for over a decade, long before the small computers like the Mac Mini and Raspberry Pi hit the streets. Now Shuttle is updating its line of mini computers with its first model featuring an Intel Broadwell processor.

The Shuttle DS57U is a fanless computer that measures 7.9″ x 6.5″ x 1.6″ and which packs a 15 watt processor based on Intel’s 5th-gen Intel Core technology. It’s a barebones system designed for commercial applications such as digital signage, kiosks, or point-of-sales systems, but you could also use it as a home or office PC. 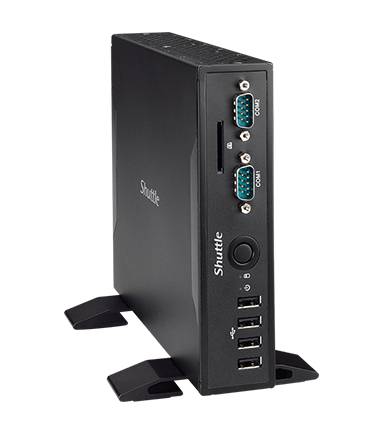 Shuttle will offer models with a choice of Intel Celeron, Core i3, Core i5, and Core i7 processors. Each model has dual Gigabit Ethernet ports, HDMI and DisplayPort, two USB 3.0 ports, four USB 3.0 ports, two serial ports, and an SD card reader.

There are mic and line jacks, 802.11b/g/n WiFi, two SODIMM slots for up to 16GB of RAM, and a 2.5 inch SATA III drive bay for a hard drive or solid state drive as well as a full-sized mini PCIE slot with mSATA support and a half-sized mini PCIE jack.

Shuttle sells this computer without memory, storage, or an operating system, but it should support Windows 7 or later or Linux.

The system is launching initially in Europe, where it has a suggested retail price of 192 Euros, which is about $217 US.

12 replies on “Shuttle DS57U is a small, fanless Broadwell-powered PC”