Plug Computers are tiny PCs that you could easily mistake for an AC power adapter, because they plug directly into a wall outlet and typically don’t include video output. Instead these small, low power, “headless” computers usually run some sort of Linux-based operating system allowing you to use the little PCs as file servers or for other simple jobs.

One popular option about a decade ago was called the SheevaPlug, and it was a device built around a 1.2 GHz Marvell Kirkwood 6281 ARM9 processor.

Now GlobalScale Technologies is bringing back the SheevaPlug… kind of. The company has unveiled a new device called the Sheeva64. It has updated hardware and software and it’s up for pre-order for $89, with an estimated ship date of April, 2019. 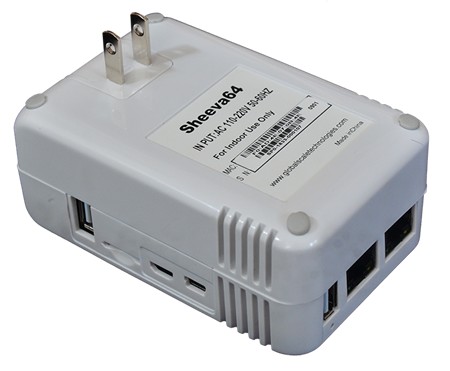 Like other Plug computers, the Sheeva64 basically looks like a large AC adapter. It measures about 4.3″ x 2.8″ x 2″ and has two-prongs that you can use to plug it right into your wall jack.

The little computer ships with Ubuntu 18.04, but it should also support other GNU/Linux distributions. It also comes an Ethernet cable and a power cord that you can optionally use if plugging it directly into the wall isn’t an option for one reason or another.

If you’d rather go as wireless as possible, you can also pre-order a $105 version that has an 802.11ac WiFi/Bluetooth 5.0 module built-in.