There are nearly two million apps available for Google’s Android operating system, and most are designed to run on smartphones or tablets. But operating systems like Remix OS and Phoenix OS make the case that you could run those apps in a desktop-like environment.

Shashlik is an open source project that takes a slightly different approach. Instead of turning Android into a desktop-style operating system, Shashlik aims to let you run Android apps as if they were native Linux apps. 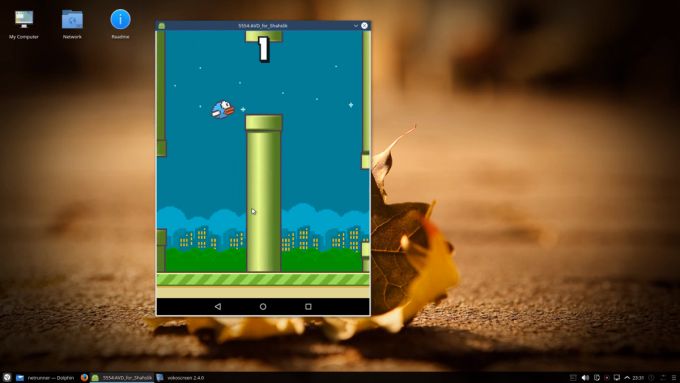 In other words, you’d be able to run apps like Angry Birds and even Microsoft Office (mobile) alongside native Linux apps like LibreOffice, GIMP, and VLC in Ubuntu, Debian, Arch, or other GNU/Linux operating systems.

At least that’s the idea. Right now Shashlik is very much a work in progress and not many apps work yet. The developers have shown off Flappy Bird and Spotify running through Shashlik though.

While Shashlik does use some emulation tools, it also brings a stripped-down version of Android to your existing Linux-based operating system and allows you to run apps in individual windows so they act more like, well, apps… and not like a whole Android device running inside of your operating system.

Of course, many of those apps rely on Android’s back button and other features, so the Shashlik runtime adds that.

Since Android already uses a Linux kernel, it’s possible Shashlik could eventually do away with the virtualization/emulation altogether and use a container model instead of an emulator.

As PC World notes, this sort of work could eventually allow Android apps to run not only on desktop computers… but also on smartphones running Ubuntu phone software.