Japanese electronics company Sharp has been offering a line of “electronic notebooks” for the past few years, with each model featuring a black and white display, a digital pen for writing or drawing, and a promise of battery life measured in days not hours.

While there are no official plans for an international launch, some older models like the WG-S50 have made their way to Amazon and other international retailers. But the user interface will likely always be in Japanese. 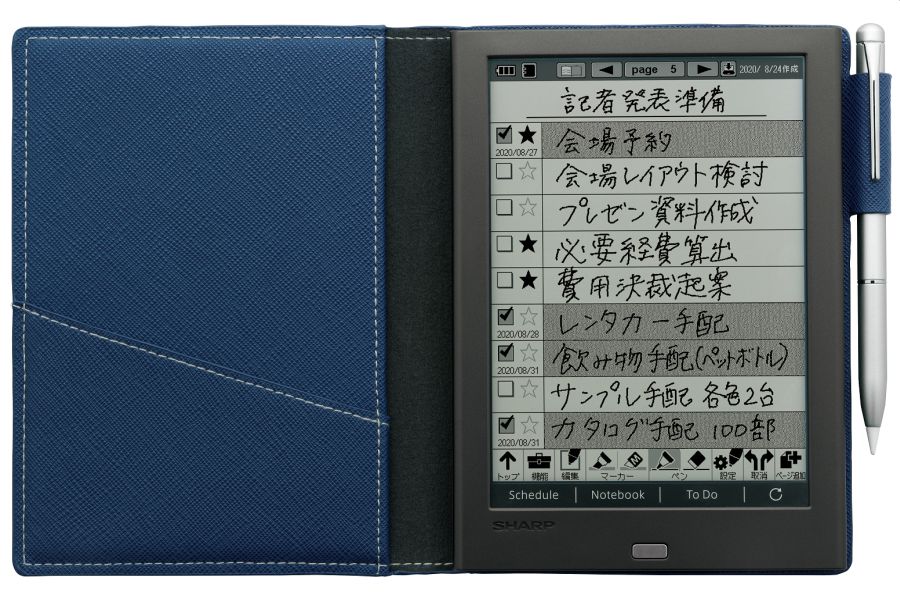 The Sharp WG-PN1 features a 6 inch, 800 x 600 pixel electronic paper display, a detachable folio cover, a digital pen, and a lithium ion battery that Sharp says provides about 10 days of battery life if you use the device for around an hour a day.

It can store up to 7,000 pages of handwritten data, allowing you to jot down notes, drawings, or anything else on the go and then output those pages as images that can be printed or saved on a computer.

Sharp’s electronic notebook operating system also has Schedule and To Do tabs in case you want to use the Kindle-sized device as an organizer as well as a note-taking gadget.

While the specs aren’t exactly exciting (the WG-PN1 lacks a frontlight and has a lower-resolution display than a $130 Kindle Paperwhite), it’s interesting to see that this is the third-gen, purpose-built electronic note taking device from Sharp, suggesting that there’s at least some ongoing demand for this type of gadget (in Japan, anyway).

Oh, and the WG-PN1 is also one of the first ePaper devices I’m aware of to feature a USB-C port.

That said, if you’re looking for an E Ink + pen device in the US, you’re proabbly better off looking at something like the MobiScribe 6.8″ digital notepad, which currently sells for less than $240 and features a Wacom pen, an illuminated display, and a higher-resolution, 1440 x 1080 pixel display.