Sharp plans to launch a 7 inch tablet tablet for the enterprise market in early 2015. At first glance the spec sheet looks pretty modest: it has a Qualcomm Snapdragon 800 CPU, a 1280 x 800 pixel display, and Android 4.4 software.

But the tablet’s most distinctive feature will be its screen. It uses a MEMS-IGZO display which should use substantially less power than a traditional LCD display. That could lead to longer battery life. 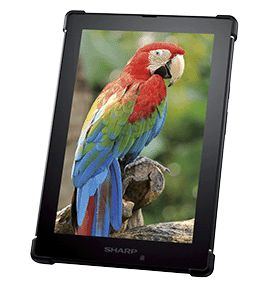 Sharp develops its own IGZO screen technology, while the MEMS technology comes from Qualcomm subsidiary Pixtronix. Put them together and you should have a high quality, low power display that’s capable of showing color or grayscale graphics.

The tablet’s other features include 802.11a/b/g/n/ac WiFi, front and rear cameras, and support for 3G and 4G LTE networks. It’s also expected to be waterproof or at least water resistant.

Sharp hopes to have the tablet ready to go in the first half of 2015, when it will be marketed to corporate customers. If the new display technology proves popular, perhaps we’ll see it show up in consumer devices at a later date.