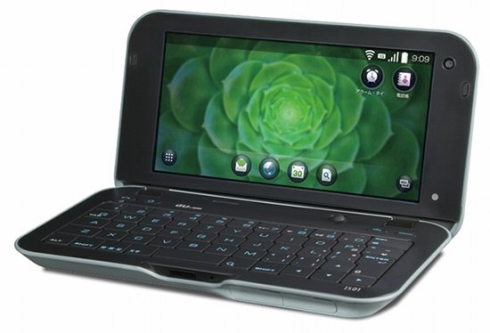 It’s been a month or so since Sharp introduced the world… or rather, Japan to the new Sharp IS01 mobile device. And a developer version of this little guy is now available in Japan.

The Sharp IS01 features a small 5 inch, 960 x 480 capacitive touchscreen display and a QWERTY keyboard, which makes it something of a cross between a smartphone and a netbook. Throw in a 1GHz Qualcomm Snapdragon processor and Google Android operating system, and I’d say it’s leaning toward the smartphone end of the spectrum.

The developor’s version of the mobile device is for coders looking to write apps that will run on Google Android 1.6 and use Sharp’s hardware including the camera, infrared data port, and LED flashlight. Developers won’t be able to use the FM transmitter, 1Seg TV tuner or EVDO radio at this point.

The consumer oriented version of the Sharp IS01 is due out next month. I don’t expect Sharp to market the device internationally, but I’m pretty sure you’ll be able to pick one up from third party resellers that make a business out of exporting products from Japan, Taiwan, and other Asian countries.