Sharp’s IGZO display technology lets the company build screens that consume less power than a standard LCD because they require less backlighting. Sharp has already unveiled a smartphone for the Japanese market that features an IGZO display. Now the company is introducing the first 7 inch tablet with an IGZO screen.

The Sharp Aquos Pad SHT21 will launch in Japan in December. 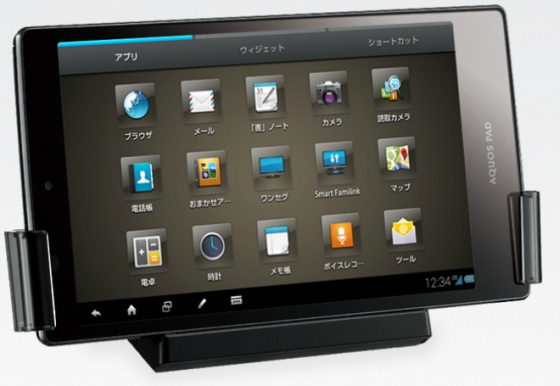 The tablet will be available from wireless carrier KDDI. It has a 1.5 GHz Qualcomm Snapdragon S4 dual core processor, 1GB of RAM, 16GB of storage, WiFi, Bluetooth, NFC, and 4G LTE. It weighs less than 10 ounces.

But what makes this tablet special is the display. It’s a 1280 x 800 pixel screen, but it’s not the display resolution that stands out. It’s the low power usage.

Sharp says the 2040mAh battery lasts 2.5 times as long in the Aquos Pad SHT21 as it would in a different tablet, thanks to the IGZO screen.