There are a bunch of Android apps that let you connect to your phone remotely to do things like transfer photos or other files to a PC without wires, view text messages and other notifications on a computer, or use your phone as a proxy server for connecting a PC to the internet.

In order to do that, these apps essentially turn your phone into a mobile server. But researchers at the University of Michigan have discovered that many app developers fail to adequately secure the ports opened on your phone… which makes it relatively easy for malicious hackers to scan for open ports and obtain access to at least some parts of your device. 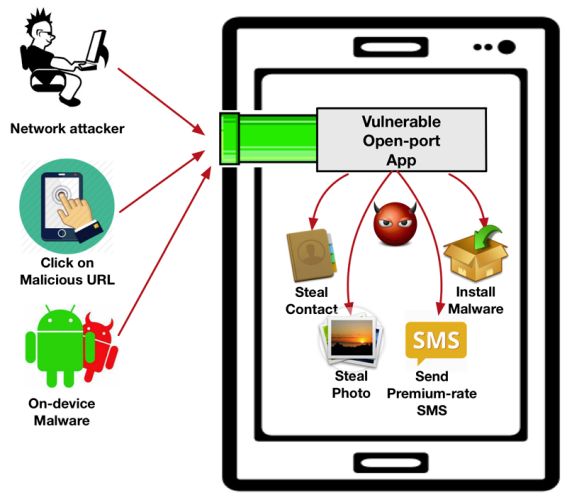 The team developed a tool called OPAnalyzer to check Android apps for open port vulnerabilities. After scanning more than 100,000 apps, the researchers found more than 1,600 apps that create open ports on a smartphone, more than 400 of which have vulnerabiliites.

57 of those are “popular mobile apps, with 10 to 50 million downloads.

Wondering if an app you use is affected? The developers haven’t released a complete list, which is probably a good thing since it would alert folks with bad intentions of where to direct their efforts. But Wired Magazine notes that popular app AirDroid “had an authentication flaw” but it has already been patched.

WiFi File Transfer, on the other hand, has apparently not yet patched a flaw in their software that could let hackers access photos and other data stored on a phone’s SD card.