Two years ago, a mini mash-up was created in the form of UDOO, which brought together Raspberry Pi and Arduino into one.

Now the company behind UDOO is back with a plan to build a more powerful model called the UDOO Neo, which combines Raspberry Pi and Arduino, and also comes with WiFi and Bluetooth connectivity, as well as embedded sensors.

The team is running a Kickstarter campaign to fund the creation of the UDOO Neo and you can reserve one for a pledge of $59 or more. 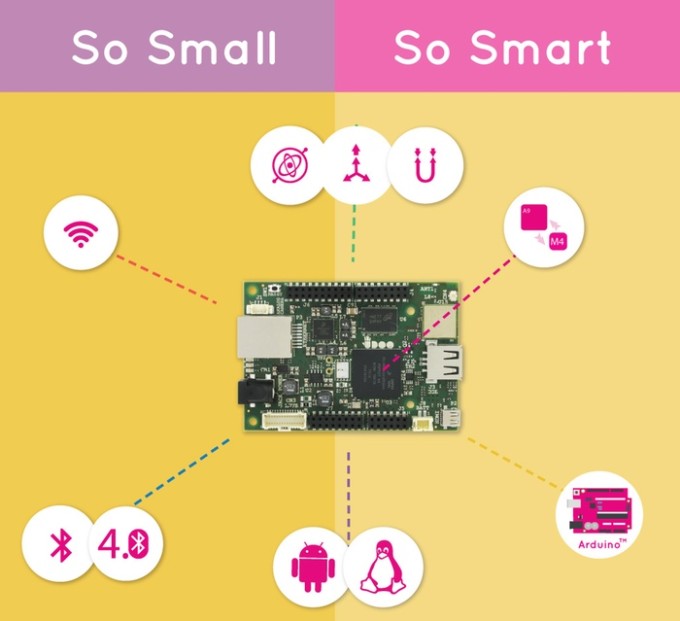 UDOO Neo is a credit card size device that can run Linux or Android. Just install Android on one microSD card and Linux on another and you can switch between operating systems by switching storage cards.

Thanks to Raspberry Pi, the UDOO Neo can be turned into a fully functioning computer. With Arduino, it can be turned into a microcontroller. The nine-axis motion sensors allow it to be turned into a robot. Because of the wireless module, which supports Wi-fi 802.11 b/g/n and Bluetooth 4.0, it is free of cables. The open-source hardware used to build the device means it is completely hackable.

Similar to the original UDOO, the second-generation device will be available in two models. UDOO Neo Basic will be outfitted with 512MB of RAM, one USB port, one micro USB OTG port, HDMI output for LVDS and touch screens, Wi-Fi and Bluetooth 4.0, analog and digital camera connections, 54 GPIOs, and a MicroSD card for the operating system.

The developers are offering the basic model for a Kickstarter pledge of $49.

For $10 more, the UDOO Neo features everything above, but also includes 10/100 Mbps Ethernet, the nine-axis motion sensors with an accelerometer, magnetometer and digital gyroscope, and one 1GB of RAM instead of 512MB.

The crowdfunding goal for the UDOO Neo was $15,000, but the team raised that much money in Kickstarter pledges in about 90 minutes.