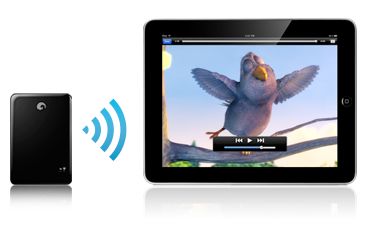 Seagate promised it would launch an iPad companion this month, and the company followed through today with the introduction of the GoFlex Satellite. It’s a 500GB hard drive with a built-in WiFi transmitter that lets you stream media to an iPad using a free iOS app.

The Seagate GoFlex Satellite is available for pre-order for $199.99.

The device supports 802.11b/g/n WiFi and has a range of around 30 feet. You can stream media to up to 3 iPads at once — or to most other WiFi enabled devices using a web-based apps. The web app works with laptop or desktop computers, Android phones and tablets, or iPhone or iPod touch models.

The Seagate GoFlex Satellite has a USB 3.0 port for transferring media from your computer, and optional eSATA and FireWire 800 connectors are also available separtely.

Unfortunately while your iPad will run for 10 or more hours on a charge, the GoFlex Satellite gets only about 5 hours of battery life when in use, or about 25 hours of standby time. That should be good enough for streaming two feature-length movies, but it’s not going to keep you company on a long trans-oceanic voyage.

The price seems kind of steep for 500GB of storage — but since the iPad tops out at 64GB, the GoFlex Satellite might be the best way to carry around a few hundred extra videos for your mobile tablet.