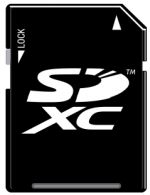 That 16GB SDHC card that provides extra storage for your netbook not doing it for you? Not to worry. The SD Association has announced a new specification for SDXC cards, with the XC standing for extended capacity. The new cards will support up to 2TB of storage, and will have higher bus speeds which means faster transfers.

As the press release puts it,t hat means you can store 100 HD movies, 60 hours of HD recording, or 17,000 fine-mode photos on a single card. Of course, those numbers are kind of arbitrary and could differ depending on your video or photo settings. But still…

It’s going to be a while before we actually see SDXC products. They’re expected to be featured at CES in 2010.

You can read the full press release after the break.

Shooting pictures at the speed of life
SDXC is also the first memory card specification to provide 2TB storage without hindering the high-speed performance necessary for high-end photography. It will provide maximum speeds even when the SDXC specification achieves its maximum 2TB storage capacity.

“SDXC is a large-capacity card that can store more than 4,000 RAW images, which is the uncompressed mode professionals use, and 17,000 of the fine-mode most consumers use. That capacity, combined with the exFAT file system, increases movie recording time and reduces starting time to improve photo-capturing opportunities,” said Shigeto Kanda, general manager at Canon. “Improvements in interface speed allow further increases in continuous shooting speed and higher resolution movie recordings. As a memory card well suited to small-sized user-friendly digital cameras, the SDXC specification will help consumers realize the full potential of our cameras.”

The SDXC specification uses Microsoft’s exFAT file system to support its large capacity and interoperability in a broad range of PCs, consumer electronics and mobile phones. The exFAT system was designed for increased compatibility with flash media, from portability of data to interoperability with multiple platforms and devices on removable media.

“The SD Association is committed to answering and anticipating consumer demand for easy-to-use memory card storage that is interoperable in any device with a matching SD slot,” Taylor said. “The SDXC card gives consumers a new, yet familiar, high-performance card that will be used in hundreds of manufacturers’ device offerings.”