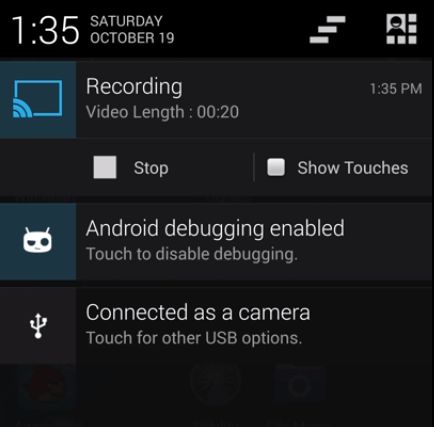 CyanogenMod developer Koushik Dutta has posted a video showing the upcoming feature — and since the video was actually recorded using the new screencast feature, it gives a pretty good idea of what to expected.

Users will be able to start a recording quickly, choose whether to include pointer input which shows a white dot where your finger is touching the screen, and you can use your device’s microphone to record commentary as you’re recording a video.

The feature will help developers demonstrate their apps, help users send feedback or bug reports to developers by showing exactly what’s happening on their device, and of course help bloggers and others to show off new apps and features.

Once upon a time, there was no easy way to take screenshots on an Android device unless you had root access. Now screencast recording is about to get easier… for folks with a custom ROM. Maybe eventually it’ll be a feature available to all Android users. Maybe.