There are plenty of cheap Android boxes that let you run apps, surf the web, and stream internet video on a TV. But most tend to use HDMI output for the audio, which means they pretty much use your TV’s speakers for sound.

Spectre has another solution: They’ve basically built an Android 4.0 mini PC into their latest SoundBar. With the SoundBar SB301524W, you can improve the sound on your 42 inch or larger TV while also running Android apps on the screen. 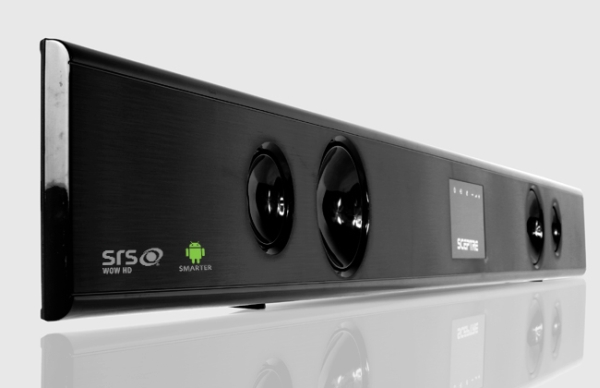 Audio inputs include RCA and 3.5mm jacks, and the device a number of EQ presets including music, movie, and game modes.

There’s also an HDMI port which lets you send video to your TV. The device supports resolutions ranging from 480i to 1080p.

The SoundBar SB301524W has a 1 GHz ARM Cortex-A9 single-core processor, ARM Mali-400 graphics, 1GB of RAM, and 4GB of built-in storage, as well as an SD card slot, 2 USB 2.0 ports (with support for up to 2TB of external storage) and support for DLNA.

As Android TV devices go, Spectre’s new SoundBar doesn’t seem to be the most powerful. But it’s probably one of the best sounding.