The Saygus V² is a smartphone that packs a long list of premium features into a single handset. The $599 phone has a 13 megapixel camera… on the front. The rear camera is a 21MP shooter. The phone has 802.11ac WiFi, wirelss charging, and 3GB of RAM.

But one of the most unusual features is the phone’s dual microSD card slots. Each can support up to 128GB of removable storage. Since the phone has 64GB of built-in storage, that means you can pop in two storage cards and carry around nearly 320GB worth of music, movies, or other data.

Saygus unveiled the phone at CES in January and started taking pre-orders a few weeks later. Now the company says the Saygus V² will begin shipping May 22nd. 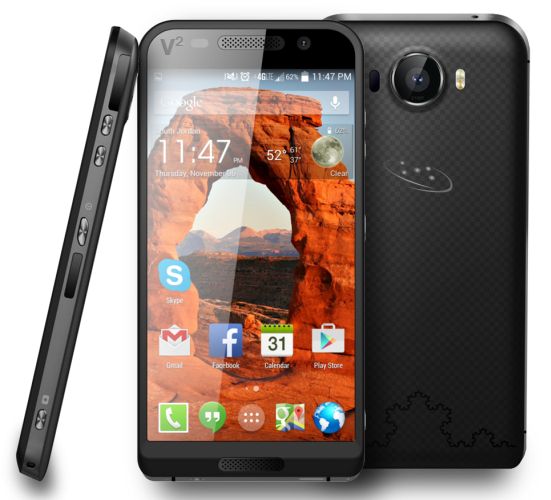 The smartphone features a 5 inch, 1920 x 1080 pixel display and a Qualcomm Snapdragon 801 processor. It has a removable 3,100 mAh battery, NFC, Bluetooth, an IR transmitter, and a fingerprint reader. Saygus will ship the phone with Android 4.4 KitKat software, which may be the phone’s least impressive feature: but it’s one that could be addressed in the future through a software update.

Other features include stereo front-facing speakers, a Gorilla Glass 4 screen, support for auto-focus and image stabilization when using the front and rear cameras, and a dual LED flash for the rear camera, and MHL support for using the micro USB port as a video output.

The phone supports GSM networks, which means it should work with AT&T or T-Mobile in the United States, as well as mobile virtual network operators including Straight Talk and Cricket Wireless.

The Saygus V² is available for pre-order for $599.

It’s not the cheapest smartphone around, but it offers a lot of features you won’t find in the latest flagship phones from bigger brands such as HTC, Samsung, or LG. On the other hand, this is effectively the first phone from Saygus, so it remains to be seen whether it will live up to its promise.