If you visit the website for phone maker Saygus, you’d be forgiven for thinking the company released its last phone in 2015. The site is filled with quotes from news articles proclaiming that the Saygus V² was the “coolest gadget,” “top disruptive innovation” or “best of CES.”

But Saygus didn’t actually release a phone in 2015. The company showed off a phone with some really cool features, and then failed to release it that year… or the next year.

This summer the company said it was making progress in bringing the Saygus V² to market, and that it had received FCC approval. Now you can see the paperwork, along with photos. The FCC has published documents related to the phone… although there’s still no word on if or when it will ship (or if anyone is still interested in buying one).

The Saygus V² has gotten a bit of a spec bump since it was first unveiled. It’s now expected to feature a Qualcomm Snapdragon 835 processor, 3GB of RAM, and 128GB of storage.

The phone has a 5 inch, 1920 x 1080 pixel display, a 21MP rear camera with optical image stabilization, a 13MP front camera, also with OIS, a fingerprint sensor on the side of the phone, a USB 3.0 Type-C port, and a 3.5mm audio jack. It supports Qi wireless charging and has stereo speakers with Harman Kardon sound.

Some of the features that would have set the phone apart in 2015 aren’t really state of the art anymore. Phone cameras have gotten a lot better in the past two years. Wireless charging is hardly uncommon, and stereo speakers aren’t all that heard to find either.

There are still a few things that help set this phone apart. Not only does it have a microSD card slot, it has two microSD card slots, with support for up to 512GB of additional storage (if you use two 256GB cards). It has a removable 3,200 mAh battery. And there’s a hardware camera shutter button. 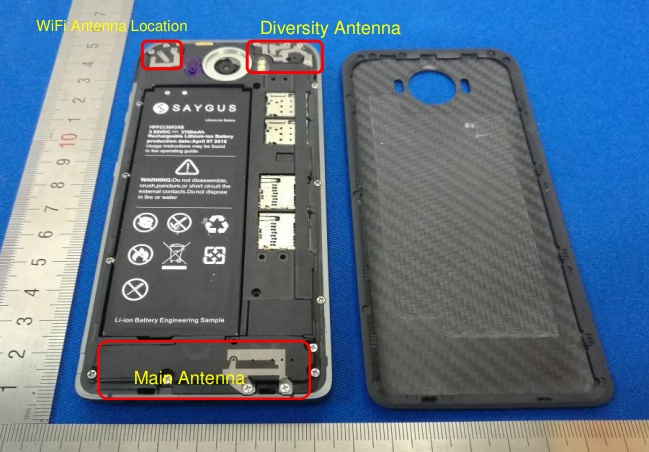 The last time Saygus offered an update on pricing (in April, 2016), the company said the V² would sell for $650 when it goes on sale… or rather, when it goes on sale again. The company started taking pre-orders in early 2015, and then Saygus followed up with a crowdfunding campaign later that year. Despite raising more than $1.3 million and promising to ship the first phones in the fall of 2015, we’re still waiting for the company’s first phone.

At least now we know what it looks like when you take it apart.

5 replies on “Saygus V² smartphone gets the FCC teardown treatment, might actually ship one day”