Gadget maker Satechi is now offering a Smart TV box designed to let you run Android apps on a TV, stream video from online media sites such as Netflix and YouTube, and use the XBMC media player to manage your media.

It’s called the Satechi Smart TV box, and it’s available from Amazon for $110 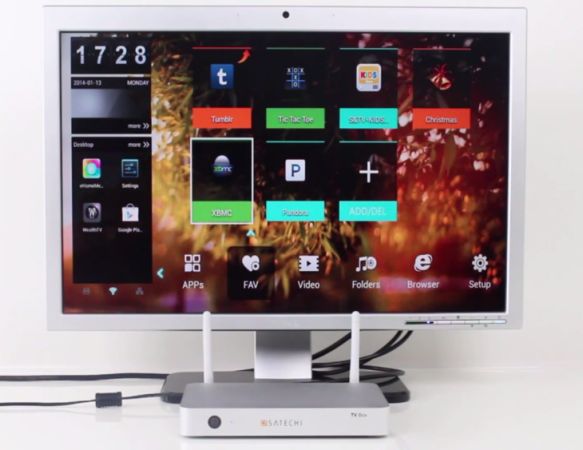 That means it’s not as cheap as some similar devices available from Chinese retailers. But the Satechi Smart TV Box looks like a respectable alternative to an Apple TV or Google TV box for folks who’d rather have a more versatile (if somewhat less user friendly) device.

Satechi includes a wireless remote control which you can use to navigate the custom Android app launcher and settings. You can either move through menu options using arrow keys or enable a mouse pointer which you can move around the screen by pressing and holding the direction buttons. It’s not quite as elegant as touchscreen or mouse input, but it might help you navigate apps that weren’t really designed for TV screens.

While Android is designed for smaller, handheld devices, companies like Satechi have been putting it on TV boxes for the past few years. It’s nice to see a growing number of these gadget makers including the XBMC app for Android, since XBMC is designed as an app to turn Android, Windows, OS X, or Linux devices into full-fledged home theater platforms.